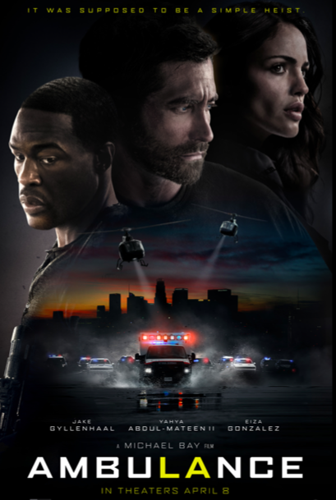 Like an emergency vehicle barreling down the highway, Michael Bay has crashed his way back into theaters.

“Ambulance” is the latest film from action director Michael Bay, following his Netflix film “6 Underground” and “Transformers: The Last Knight.” The film, which was written by Chris Fedak, is a remake of a 2005 Danish film of the same name.

Will Sharp is a marine veteran struggling to make ends meet. After his insurance denies his request to pay for his wife’s experimental surgery, Will goes to his brother Danny for some money, who ropes him into a bank robbery. But when the heist goes wrong, they hijack an ambulance with an injured cop on board, which they use to prolong the police chase to get away.

“Ambulance” is a film rife with tropes and Michael Bay’s stylings that might not get everybody on board. But the pure popcorn entertainment that this film presents with suspense, action and extreme performances is nigh unmatched.

The film has three primary leads. Yahya Abdul-Mateen II as Will, Jake Gyllenhaal as Danny and Eiza González as Cam, the EMT onboard the ambulance. All three of them fill the movie with intensity, as they try to stay calm during extreme situations.

Abdul-Mateen II and González both play their characters with a great amount of focus as they try to do their jobs, but the moments where they do snap stick out as they convey the insanity of the situation.

However, Gyllenhaal kind of steals the show, as he portrays Danny as someone unhinged and always on the brink of killing everybody in their way. He keeps talking throughout the film, which is often funny as he never shuts his mouth. It’s also extremely entertaining to watch him yell at everyone for over two hours. He plays a perfect manipulator, getting everyone to do anything for him as he wears them down over time — fans of Taylor Swift are familiar with this side of him.

The plot of the film is rather simple. Will needs money, Danny ropes him into a heist that goes wrong, they hijack an ambulance and now the police and FBI are chasing after them.

The film uses this simplicity to its advantage, as the characters utilize their setting and situation to try and make it all work out. Along with that, Los Angeles feels fleshed out and sprawling, with the characters using their knowledge of the city to navigate through it.

From Danny enlisting help to an impromptu surgery, the film creates suspense all from within the inside of the ambulance. It knows how to craft situations that put the characters in danger, and it becomes surprisingly engaging. This is helped by the characters all having tangible goals and motivations that are built on throughout the film. Danny is just trying to get home to support his family. Danny needs to complete this score. Cam is trying to do her job as an EMT and save the patient that’s in her ambulance.

An additional note, the film does a great job at portraying Will and Cam specifically as characters who aren’t respected by the people they serve. The film contains a surprisingly good commentary on the treatment of veterans and EMTs within the United States, especially as they are the ones that are being pushed into these situations in order to support themselves and their loved ones.

It also doesn’t waste any time getting right into the action, with the majority of the film taking place inside of the ambulance. With that in mind, the action is exhilarating, with car chases and explosions dominating the screen, as is typical of Bay. This is where a lot of the tropes come in, with the cars driving through fruit stands and careening off the road for almost no reason. The characters fall into a lot of archetypes as well, but they’re a little more subversive than the action movie stereotypes.

Despite the prevalence of common tropes, the action is fairly easy to follow along with and greatly entertaining. Bay’s ability to present chase sequences, intense moments and full-on explosive setpieces is fun and a showcase of his best asset as a filmmaker.

His style is present throughout the film, including the cinematography. There are his signature camera spins, with sequences cutting from the camera spinning in one direction to the opposite direction around the characters as they make big decisions.

There are several extreme angles that showcase the power dynamics as well as handheld cameras and close-ups that place the audience right there next to the characters. There’s also great use of aerial and drone cameras that fly through several scenes that build on the fast-paced nature of the film.

Some of that might be detrimental to some viewers, especially those who aren’t a fan of the constant spinning, but it’s used decently within the movie. However, the editing is one of the weakest parts of the movie. It’s just a little too sporadic in its cuts, creating a faster tempo during scenes that need to be a little slower. It’s not awful, but it’s the weakest aspect of the film.

On the other hand, the sound design and score are quite good, with guns and crashes having great impact and weight. The score offers a fittingly intense and electric undercurrent to the film’s action. There are also some good song choices for different parts of the movie that give the film an extra bit of character.

Finally, the practical effects are spectacular. Everything feels real, which helps when cars explode and crash in spectacular style. With a measly $40 million budget compared to most blockbusters, this film uses all of it and looks good doing it.

“Ambulance” is an example of how to do a big chase film well. It’s not necessarily for everyone, but for those that enjoy action films with good characters and thrilling sequences, this film is sure to satisfy audiences.

This movie is a great time in theaters. It’s fun, exciting and enjoyable, all in a little over two hours. It’s a big dumb action movie in the right way, all while containing rich characters and astonishingly good commentary on the United State’s treatment of “heroes.”

To be perfectly clear, this isn’t high-brow cinema. It’s nowhere near the mastery on display in films like “Mad Max: Fury Road” or the cool stylings of the recent James Bond or “Mission Impossible” movies. But it doesn’t need to be, and Michael Bay does his job and he does it pretty well.

If you’re looking for a decent action movie and you’ve already seen the incredible “Everything Everywhere All at Once,” then this is a good — but not comparable — alternative. It’s a good way to kill a couple of hours if you don’t want to think too deeply about the events transpiring on screen. Even then, it’s still an entertaining thrill ride in the back of an ambulance.