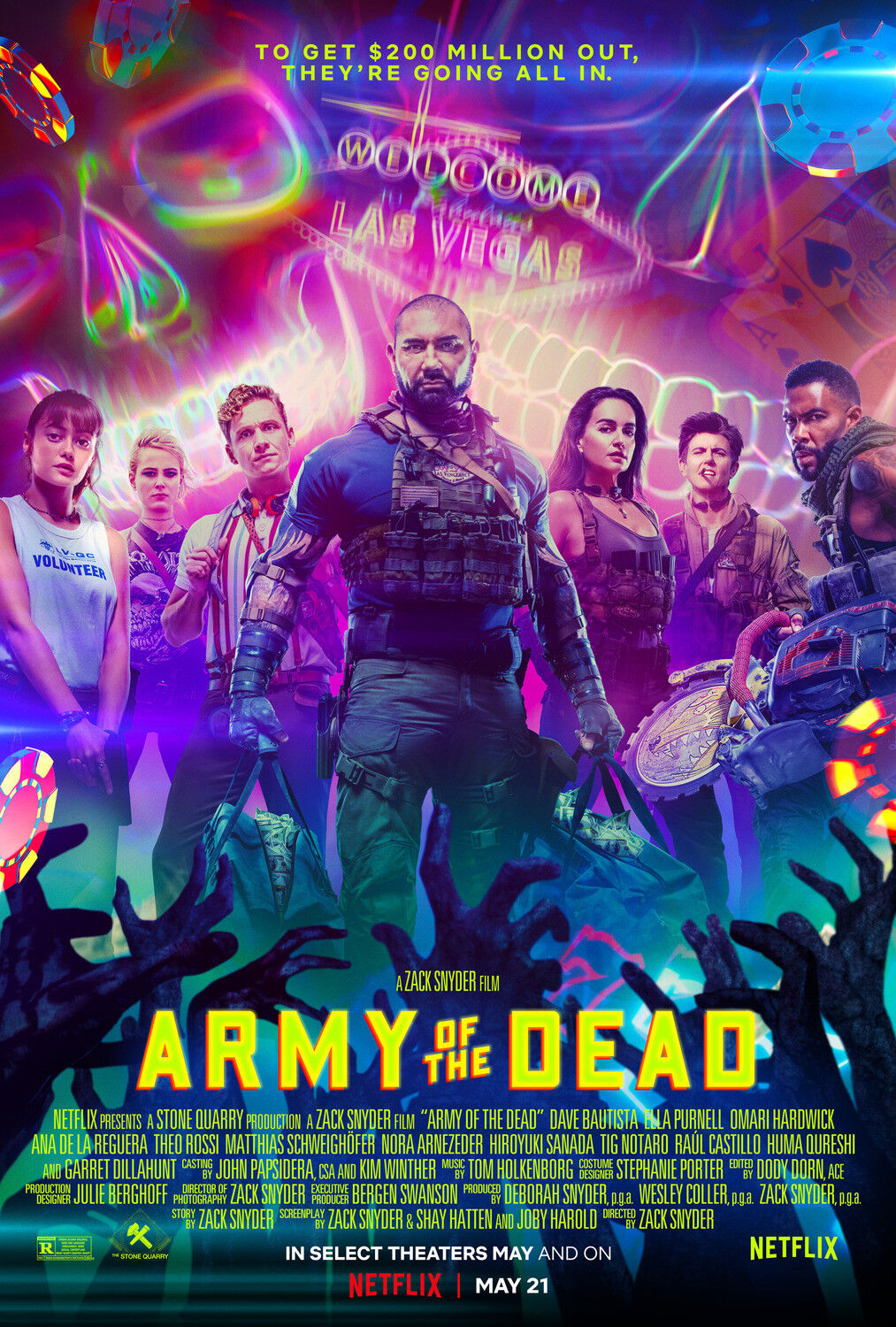 What happens in Vegas, stays in Vegas; including a zombie outbreak.

“Army of the Dead” is the most recent film from Zack Snyder, following the release of “Zack Snyder’s Justice League” earlier this year. It was directed by Snyder and written by him along with Shay Hatten and Joby Harold. It released on Netflix after a brief theatrical debut.

A zombie outbreak occurs in Las Vegas, fortunately staying confined within the city. A casino owner, Bly Tanaka, hires former mercenary Scott Ward to compile a team to infiltrate the walled off city and break into his casino vault to extract the money inside. But they must work fast before the United States drops a nuclear bomb on the zombified city.

“Army of the Dead” is an entertaining zombie heist film that gets in and out in a fashionable manner. It’s a little long, but it never feels intrusive or wasteful.

Dave Bautista leads as Scott Ward, a mercenary struggling after the outbreak. Bautista gives a great performance, especially by exploring some of the more traumatic and down to earth elements of his character. He provides a great emotional through line in the film while also playing the heavy lead.

Along with Bautista is the team that he brings together. There is Ella Purnell as Scott’s daughter Kate, Omari Hardwick as the philosophical mercenary Vanderohe and Ana de la Reguera as mechanic Maria Cruz. Also joining them is Matthias Schweighöfer as safecracker Ludwig Dieter, Nora Arnezeder as soldier Lily, Tig Notaro as the wisecracking helicopter pilot Marianne Peters and zombie influencers Raúl Castillo as Mikey Guzman and Samantha Win as Chambers.

Tagging along with the team is Garret Dillahunt as Martin who works for Bly Tanaka played by Hiroyuki Sanada.

Nearly everyone gives a good performance. They do a great job at making the characters feel distinct, while also having chemistry with each other. Of particular note is Omari Hardwick and Matthias Schweighöfer, who tag team for most of the film. They are fun to watch as they play into each other’s strengths and weaknesses.

Tig Notaro also deserves a shoutout, primarily for fitting extremely well into the film despite filming her scenes separately from everyone else as a replacement for a different actor. She was digitally inserted into the film and it’s nigh impossible to notice.

Overall, everyone does a good job at making the team feel like a team. It also goes well with the heist motif, delivering a huge crew each with different specialties.

The general storyline of the film is pretty simple, following several tropes and conventions of both zombie and heist films. It’s familiar, but that’s also why it works. Its uniqueness comes from the blending of the two genres, even when both elements stick within their frameworks.

However, there are some interesting ideas presented throughout the film, especially for the zombies. Along with a zombie tiger, there are alpha zombies that lead the pack, specifically a King and Queen. There are a few elements that would be spoilers, but they help make this film standout by offering some unique takes on zombies outside of the usual mindless horde.

The film has great tonal balance. It works as a horror film with the zombies (especially with several suspenseful scenes) while also acting as an action film. It’s also not overly serious, which helps in making it a fun film to watch. There are some emotional elements in the film that are handled quite well that most likely wouldn’t work if it was too serious.

The film does have some comedic elements, but they are sparse. It breaks up the film well without being annoying. Those elements are also primarily delegated to a couple characters, which is a breath of fresh air compared to some films where everyone has to be funny.

The technical aspects of this film are well done. The cinematography (which was shot by Snyder himself) is really good, but overly desaturated. The camera also goes in and out of focus a lot, which could be deemed a directorial decision, but it can be a bit distracting. Other than that, it’s well shot with some interesting composition and a consistent style.

The editing is also great, staying pretty consistent throughout. It’s not disorienting, especially during action scenes. The best compliment to be given here is that it wasn’t noticeable, which means it’s great.

The special effects are good as well. The best effects are the ones that aren’t seen, specifically with the aforementioned digital inclusion of Tig Notaro. But other elements like the zombie tiger look excellent. There were a few shots later in the movie that looked a little off, but it wasn’t a big deal.

Finally, the score is good. It mixes well with the film, while providing some great moments in different scenes. However, it mostly blends into the background of the film. That isn’t a bad thing, but it’s not the most memorable score.

“Army of the Dead” is a great zombie heist hybrid film. Even if it’s fairly conventional, the performances, story progression and unique elements make it a film worth checking out. It’s a little long, but it never felt like it was wasting time. Despite the length, it was never boring or dull.

This film will more than likely be considered among some of the better zombie films, at least in recent memory. It’s not peak George A. Romero, but it’s a good time overall with some unique zombified ideas.