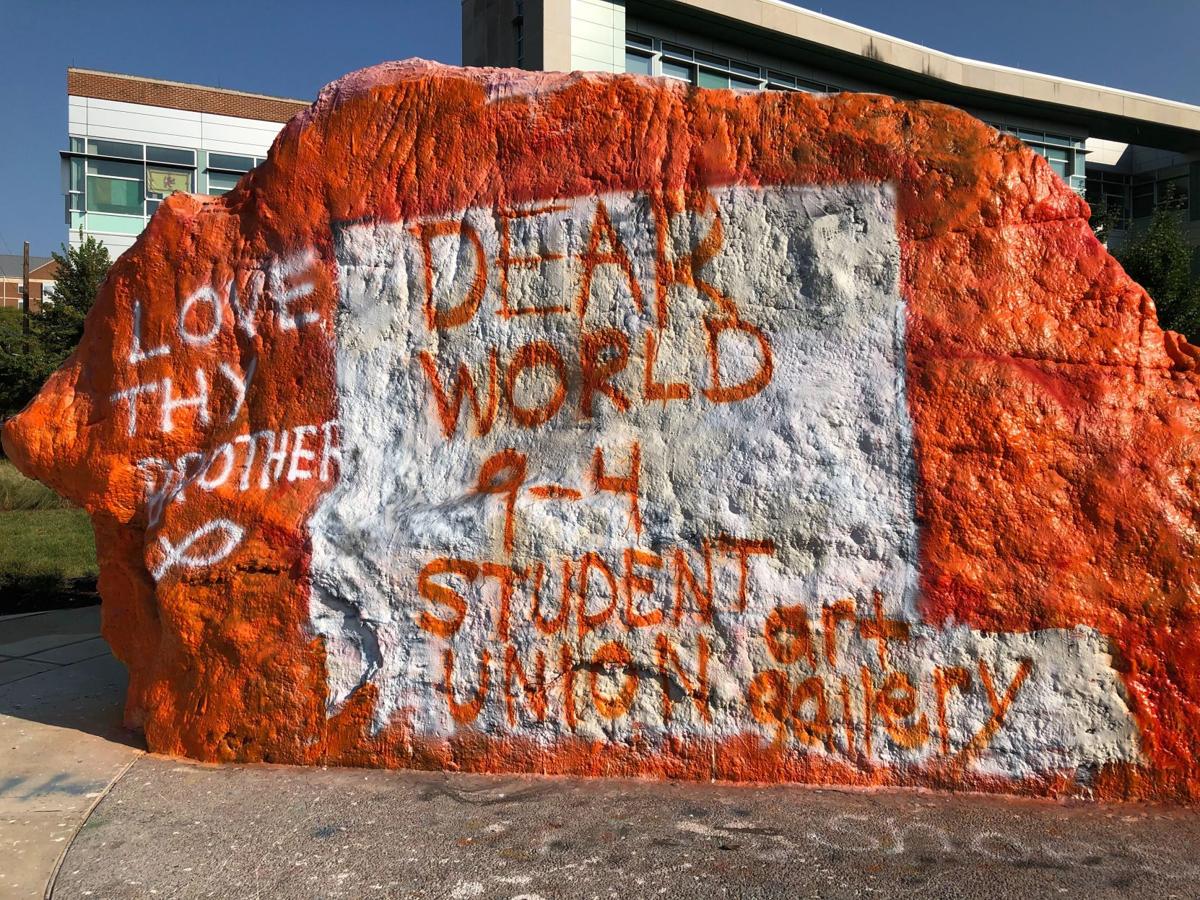 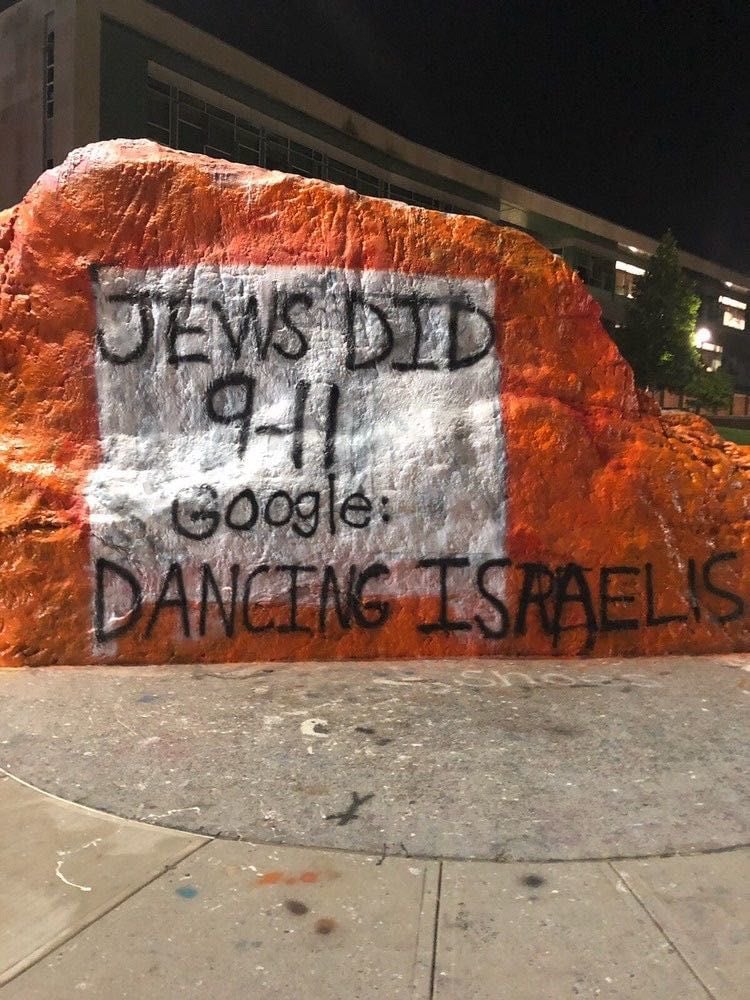 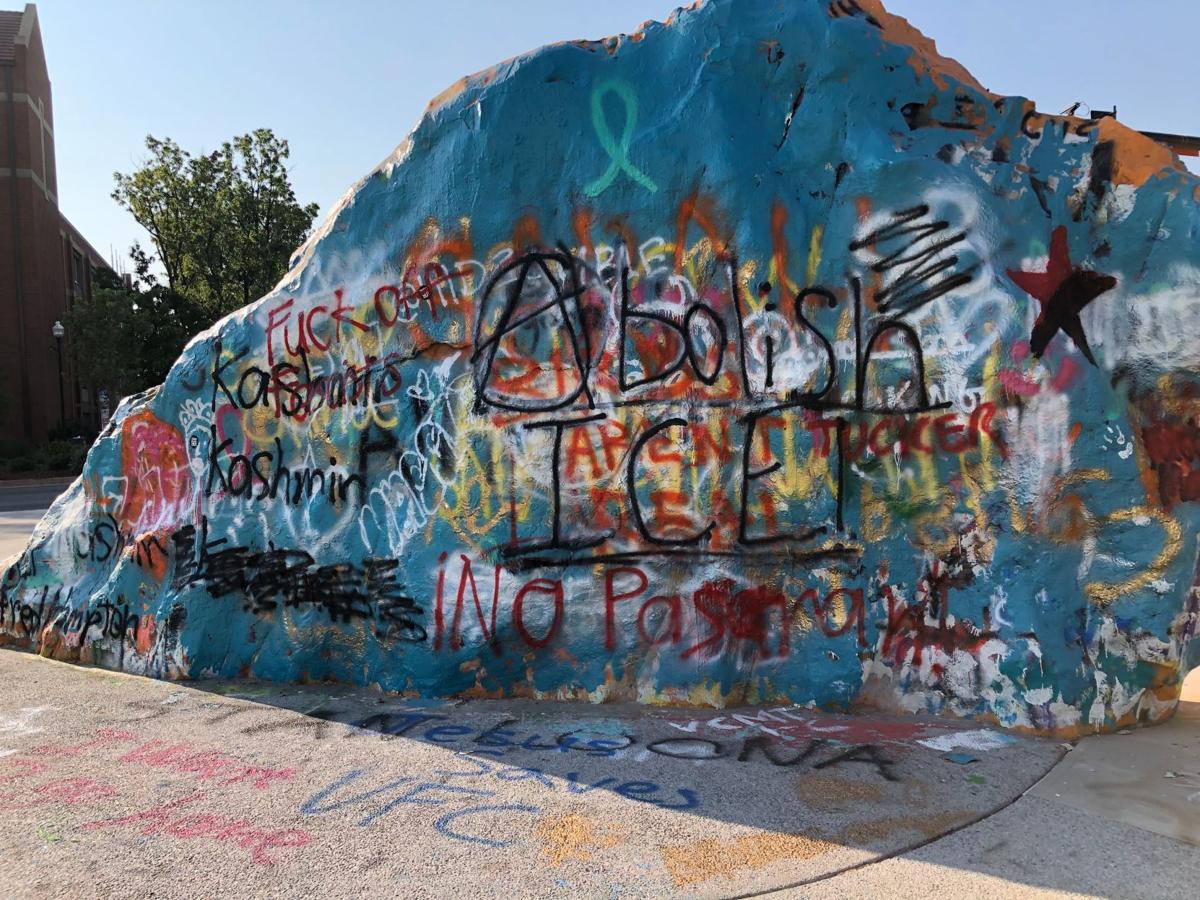 Late Wednesday night, the Rock was defaced with a message of anti-semitism.

The words, “JEWS DID 9-11” and “Google: DANCING ISRAELIS” were spray painted onto the Rock. The words obscured the picture of the young Florida boy’s homemade UT t-shirt that was placed there just days earlier. After he was bullied for wearing a homemade UT shirt on college t-shirt day at his school, UT sent the young boy a care package full of UT swag and even added a shirt in the VolShop based on his design. A portion of the shirt’s proceeds will go to STOMP Out Bullying, an organization that works to end bullying.

This is the third time in less than a year that the Rock has been the site of anti-semitic hate crimes; just last October, Hillel, a Jewish organization on campus, held a vigil at the Rock in memory of the victims of the Pittsburgh Tree of Life synagogue shooting. Hillel painted the Rock with the message “Stronger than Hate,” alongside the Star of David.

When the Rock was defaced less than two days later, the message was changed to “Stronger through Hate” and the Star of David was covered up by a swastika.

Less than two weeks from the first incident, an image of Smokey the dog was painted on the Rock. It was soon spray-painted over with swastikas and other messages of hate, including “AIDS is good,” “Rape!” and “FREE PALESTINE.” “Manson,” the name of the infamous cult leader who led his followers to commit murders in hope of starting a white on black race war, was also painted on the Rock.

Last year’s anti-semitic messages were not the first instances of the Rock being utilized for hate. In December 2017, the words “white pride” were painted on the monument.

By early Thursday morning, the Rock had already been painted over with a different message. The front had the information for the Dear World Photoshoot event, which is taking place from 9 a.m. to 4 p.m. Thursday in the Student Union. The event, part of the Vol is a Verb campaign, encourages students to share their stories through portraits of themselves.

“Love thy brother,” was also painted on the front of the Rock.

Chancellor Donde Plowman sent out an email Thursday morning regarding the hateful messages.

“In one week, the Rock has brought out the best and the worst. We celebrated the outpouring of love for the young Volunteer who made his own T-shirt, and someone beautifully depicted the shirt on the Rock. Last night, someone covered that message of love with an anti-Semitic hate message. We condemn that hate aimed toward members of our Jewish community, and we understand that words are not enough,” Plowman said.

She also explained that she will address the issue by meeting with members of the Jewish Volunteer community.

“Vol is a verb. Being a Volunteer means taking action. We are seeking Volunteers to join us in uniting around how we respond to hate on the Rock. We want to work together to create a movement around what we want to be. I will start by meeting with members of our Jewish student community this morning,” Plowman said.

Senior student Owen Flomberg shared his opinion on the situation.

"I am disgusted but not surprised that the Rock has been defaced yet again by hate filled individuals. It is especially sad that this anti-Semitic slur was painted over such a positive work of art depicting the Florida boy’s shirt. Last night Vols rallied quickly as we have so many times before, promptly covering the hate and demonstrating that these beliefs have no place on our campus," Flomberg said.

Early Thursday morning, the UT Police Department released an email stating that they will be co-hosting a training on October 3rd on hate crimes for all interested law enforcement officials, prosecutors and investigators.

Anyone who witnesses or is the victim of a hate crime on campus should report the incident to UTPD.