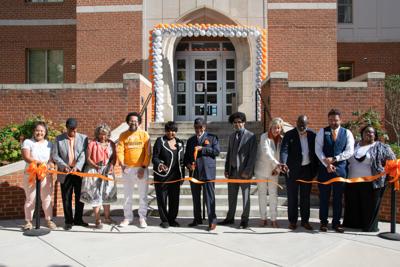 On Friday, Sept. 17, the University of Tennessee hosted a dedication ceremony to honor the legacy of UT alumnus Theotis Robinson, Jr. and Rita Sanders Geier, both of whom were instrumental in Tennessee’s fight for racial justice in higher education. The former Orange and White Halls, located on the corner of 20th Street and Caledonia Avenue, were renamed Geier and Robinson Halls, respectively.

Geier and Robinson are both pioneers in the University of Tennessee community for their advocacy for equal rights for Tennesseans from a young age. Introducing the two, Small talked about the profound influence both of them have had on him.

“We are honoring two people who did not just change the trajectory of our campus or our state, but our nation,” Small said. “Because of their relentless advocacy, they have created meaningful change and helped many others find their way.”

“Ms. Geier is best known for the landmark lawsuit that sought to disband inequities in our state’s higher education system,” Plowman said. “Dr. Robinson is known as the first Black undergrad student at UTK. After pressing his case to the university president and the Board of Trustees, he demanded that they see him and admit him, and this fight for justice opened the doors of the university to thousands upon thousands of students who had never had that opportunity before.”

Vice Chancellor Cuevas returned to the stage to introduce Geier, where she humbly accepted the honor and gave thanks to the university for their continued advocacy for racial equality.

Geier praised the university for recognizing “a struggle that has had many phases, has had many triumphs, but has also faced many trials.”

“That struggle will never be over but it takes strong hearts, strong determination and sharp minds,” Geier said.

Geier described the building as an “overwhelming honor,” serving as a reminder of the hard work that has made the university what it is today. Concluding her speech, Geier gave a reminder to current members of the UT community.

“My heart will always be with you on this mission,” Geier said. “I am so proud to have the Geier building, but I’m also just proud of where you’ve come and the confidence I have leaving today that much more will be achieved.”

Following Geier’s speech, Robinson took to the stage, beginning by thanking his wife and two sons for their support along the way. He spoke of his experiences in 1960 that revealed just how much progress the state and university have since made.

After reading a piece in the Knoxville News Sentinel about the University of Tennessee not admitting Black undergraduate students, Robinson was inspired to write a letter that began his “very improbable journey.”

“It is a benefit to all of our students to learn in a diverse learning environment,” Robinson said. “In 1961, there was not a dormitory that would have accepted me. Now to have a residence hall named in my honor right across the courtyard from another residence hall named in Geier’s honor, is such a pathway, a traversing of relations and understanding that spans decades, so I am honored to be here today.”

The announcement from Sept. 20 about the official renaming of the halls from UT News credited recent alumna Maria Urias with initially organizing the move to honor Robinson and Geier last year.

“The initial push for the renaming was recommended by former student and 2021 Torchbearer, Maria Urias, who proposed finding a creative way to recognize civil rights trailblazers that left lasting legacies at UT,” the announcement said. “University administrators were highly supportive of the idea and worked collaboratively to make it happen.”

Following the speeches, Robinson and Geier, along with others, cut the ribbons to the newly named residence halls, signaling an important moment in the honoring of the efforts of Black trailblazers at the University of Tennessee.

This article has been updated to include additional information.