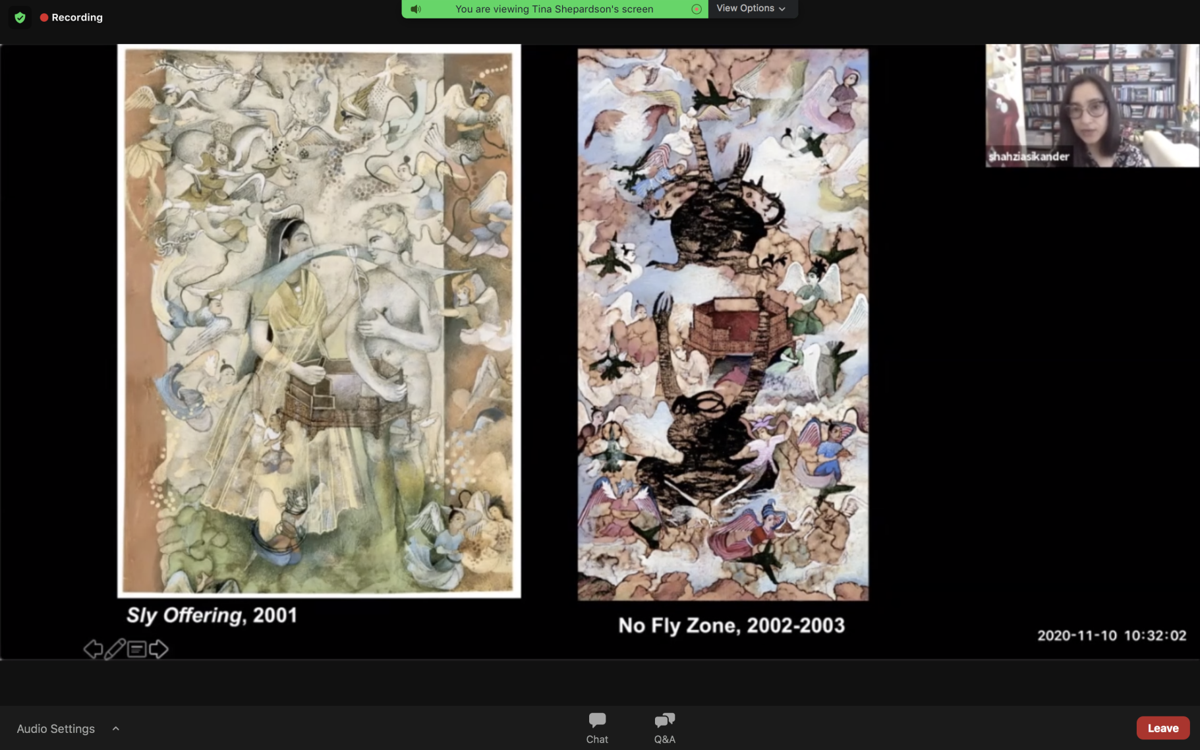 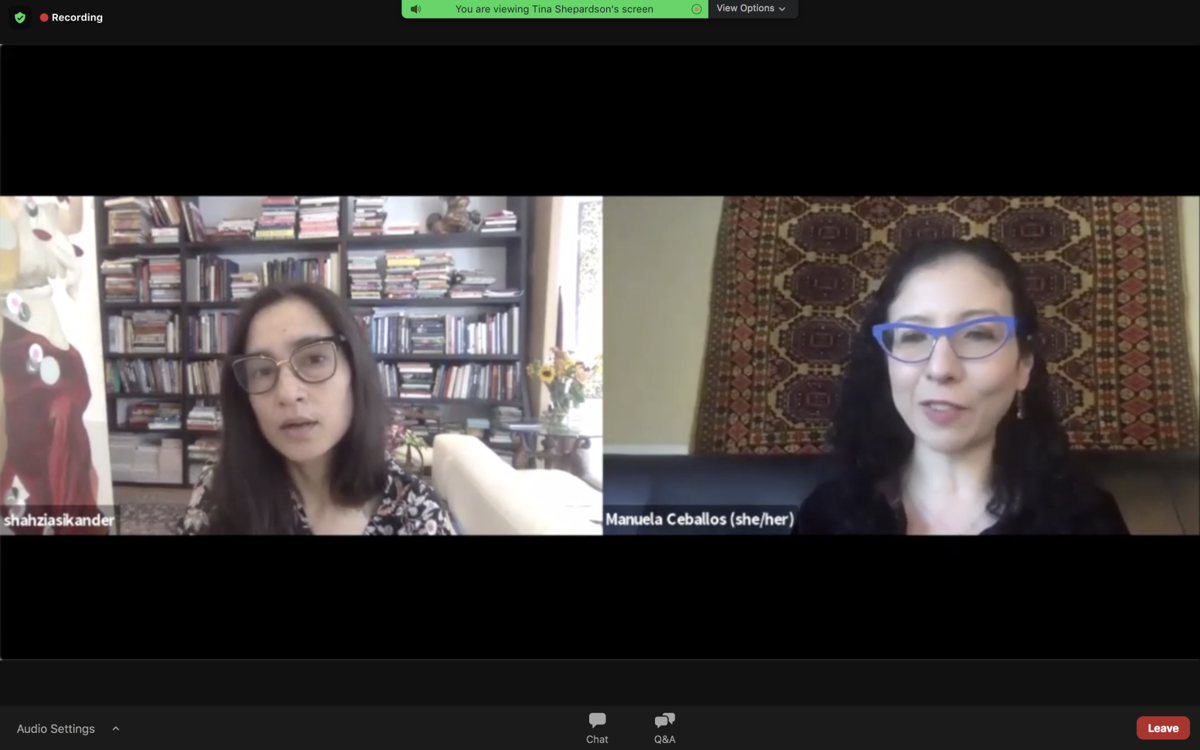 Artist Shahzia Sikander (left) and assistant professor of religious studies Manuela Ceballos in conversation during the annual Siddiqi Lecture in Islamic Studies via Zoom on Nov. 12, 2020. 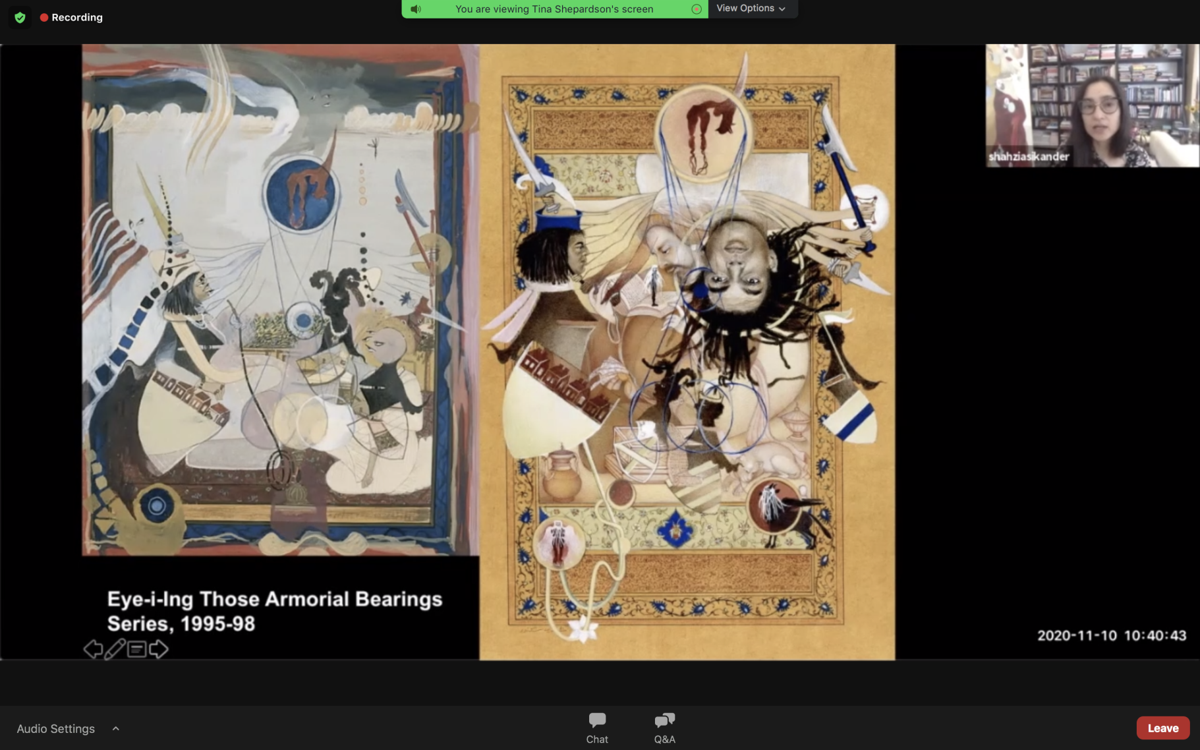 The critic Alfred Kazin once appraised the work of James Baldwin by saying, “to be James Baldwin is to touch on so many hidden places in Europe, in America, the Negro, the white man — to be forced to understand so much.”

The same could easily be said of Shahzia Sikander, the renowned Pakistani-American visual artist whose portfolio transverses every imaginable boundary of genre and theme. To be Shahzia Sikander is to touch on so many hidden places in America, in Asia, the colonizer, the colonized — to be forced to understand so much.

That which is colonized takes many forms in Sikander’s work, from her native country to the female body to the religion of Islam.

As this year’s guest for the Department of Religious Studies’ seventh annual and first-ever virtual Siddiqi Lecture in Islamic Studies, Sikander traced her career from its origins in Indo-Persian miniature painting in Pakistan through its many evolutions of medium and scale after her move to the United States.

She is the past recipient of a MacArthur “Genius Grant” and her work has been exhibited in galleries and museums in dozens of countries around the world.

Sikander is the first visual artist to be featured in the lecture series, after six previous speakers who were all scholars of religion.

However, it is no accident that Sikander was chosen to speak in a series by and for academics. Her artwork is deeply rooted not only in history, but in the critical intersections of gender, race, sexuality, religion and politics, with certain artworks analyzing all of these fields of study at once.

Her works operate on a global scale and are also stunningly intricate and colorful, managing to be a pleasure both for the eye and the mind.

In a 70-minute pre-recorded conversation with Manuela Ceballos, an assistant professor of religious studies who specializes in Islam, Sikander explained that the intricacy of her work is owed to her early training in the genre of miniature painting at the National College of Arts in her home country of Pakistan.

The genre of miniature painting, a source of national pride for Pakistan, had largely fallen out of favor with younger artists by the time Sikander entered art school in the 1980s.

“Miniature painting, with its unresolved national status, almost like a deep stigma, captured the paradox of culture and nationalism far more than any other discipline at the National College of Arts in the shifting geopolitical landscape of the 80s,” Sikander said. “It was mostly mired in its prevalent iterations of tourist kitsch much more than in its indigenous status, and it had been declared derivative.”

Sikander’s work in the genre, notably her 1990 breakout piece entitled “The Scroll,” which depicts the artist as a ghostly female form moving through a panorama of her childhood home, introduced new possibilities of its use to both uphold and subvert traditional depictions of women and religious and cultural icons.

“My work was very influential for a whole generation of artists,” Sikander said. “It was signaling back that miniature painting was viable, valid.”

Though she has since expanded into diverse genres of visual art, from sculpture to portraiture to photography and mosaics, Sikander still reserves a special place for the ancient art of miniature paintings, which, she informed the Zoom webinar audience, are often about the size of a sheet of notebook paper and are bafflingly detailed.

The genre of the miniature painting has often been seen as what Sikander termed a “Pakistani nationalistic art form,” though she has resisted this association through her work, which often breaks with tradition more than it upholds it.

As she experimented more with the political and cultural themes of her miniatures, she realized how the genre could create powerful statements and transcend its reputation as simply ornamental.

“The spontaneous nature of it was disrupting the very perfect or this projected precious notion to the miniature,” Sikander said. “So I was questioning this preciousness that is being projected onto a very, for me, intellectually exciting genre. Why do we have to talk or think of it always in terms of something decorative or beautiful or something that is precious?”

In fact, much of Sikander’s career has been dedicated to questioning and dismantling the definitions that others have tried to place on her art.

When she moved to the United States in 1993, where she received a master’s degree at the Rhode Island School of Design and where she resides today, Sikander felt a pressure to produce art that would represent the brand of otherness that her new home placed on her.

Her artwork began to reflect a concerted effort to break away from these expectations.

“With the distance from home, the process of self-actualization came into focus,” Sikander said.

“The new work started to resist the straightjacketing that I encountered in terms of my biography. Who I was, what I represented beame limited constructs, and the burden projected onto me to represent a culture felt not just unfair but almost alien, becoming the other.”

Now, as she began breaking into other mediums, her iconographies took less traditional forms, becoming more androgynous, more chaotic, less pretty and complete. As Sikander says herself, the “order started to collapse.”

The new iconography was less the result of her training or her identity as a Pakistani woman or an immigrant, but rather came from inside Sikander as she strove to deconstruct and reimagine historical norms. She says this has been the most exciting part of her career.

“Learning how to drop fear, embrace vulnerability, to live the true potential of the mind with all these burning questions was very exhilarating, so it wasn’t just like I was simply creating new narratives in the miniature style,” Sikander said.

“It was really about digging deeper to really understand, ‘how do you take ownership of tradition?’ Or, ‘what is this idea of tradition and how can iconography come from within,’ which is not appropriated from older paintings.”

Having outgrown the tired burden of identity, Sikander was free to follow her imagination to any medium and any scale it led.

For an artist who began in miniature paintings, Sikander’s work has certainly not been bound by size. A recent mosaic commissioned by Princeton University stretches 66 feet up a wall of the campus’s International Building.

And Sikander’s global audience is by no means miniature. A 2015 collaboration with Times Square Arts titled “Gopi-Contagion” flooded screens in the world’s most visited tourist destination with Sikander’s artwork from 11:57 p.m. until midnight every night in the month of October.

Sikander’s portfolio is so diverse, so complex and so varied that it is impossible to capture in words. Prof. Ceballos herself had trouble finding the right way to describe what is indescribable about her guest’s artwork.

“I’m just remarking how historically engaged and how deeply, there’s something, I hesitate to say ‘academic’ because that’s not the right word, but there’s something so intellectually exciting as well as aesthetically exciting, so rich that I’ve just learned so much,” Ceballos said.

Now 51, Sikander is turning her attention to a suite of projects that deal with dual themes of abundance and extraction. Recently, she adopted a sense of British wit to create a Christmas tree made entirely out of oil rig parts as a visual parody of the “gift” of oil from the Middle East to Western nations.

This kind of stylized political statement is only one among many controversies into which Sikander has dared to wade into with her art. Several of her pieces contain spiritual, silhouetted forms of the Prophet Muhammed, an artistic tradition with an ancient lineage that has garnered media attention amid the ongoing controversies surrounding offensive caricatures of the Prophet.

Like many people who grew up Muslim without speaking Arabic, Sikander says that her interaction with the language has been mostly through the senses of hearing and seeing, which is how she likes to integrate Arabic into her work.

“I’ve been interested in the visual dimension of the script itself, which is incredibly powerful and beautiful and has an incredible logic behind it,” Sikander said. “Geometrically, it’s so precise … the experiential, through visual and through recitation and through the sound, all of that collapses and gets used in some of the drawings that I make.”

Drawing on sacred, ancient practices like Qur’an recitation and calligraphy and finding a way to make them new and exciting through her visual artwork is a hallmark of Sikander’s career.

That she has dared to go into the heart of traditions that millions hold dear and to reinvent and subvert them in ways that feel newly sacred is likely to be her legacy as a transnational feminist artist.

Perhaps the most surprising claim of a lecture filled with questions of tradition (how it is made, who has authority over it, what it means to learn it and then break it) was Sikander’s advice to students during the live Q&A session following the pre-recorded lecture.

Sikander called tradition an “illusion” and advised students not to become obsessed with it as so many young people do.

“Students think that there’s some magic … ‘how can I learn this tradition’ and then, you know, it’s going to give me a way of being in the world as an artist,” Sikander said. “That fetishization towards tradition needs to be demystified … this illusion of the tradition is an ongoing journey for me, this idea of how you learn something in depth.”

As its moderator, Prof. Ceballos ended the lecture with some level of difficulty. After a 70-minute conversation and a smattering of questions from the Zoom audience, she was tasked with putting the cap on a discussion that could last hours longer.

“The engagement that you have with all these various discourses makes it both endlessly rich and interesting, but we could talk forever about any of these particular subjects, right?” Ceballos said. “The engagement with politics and different movements, language and tradition and innovation and so on.”

Amid the many inconveniences of hosting an annual lecture in a detached format, there was this consolation — that Sikander’s kaleidoscopic sight, through which history and religion and politics become fractured into a million sparkling pieces, was lent to her audience, if only for a little while.

“I think societies are not static, histories are never one dimensional,” Sikander said. “There are infinite ways to create meaning.”