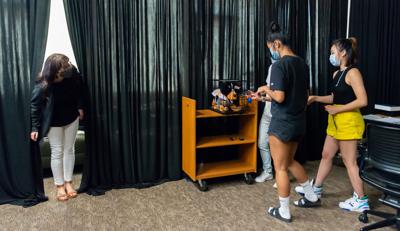 From Aug. 16 to Aug. 27, Hodges Library’s Mary Greer room was occupied by what seemed to be a blacked out secret room. But for those who dared to step inside, it was a test of wits to “save Smokey.”

Students signed up in as little as pairs of two and as large as groups of six or more members. After a brief video, students were tasked to find the key that would release a stuffed Smokey from his cage.

Students were actually locked in the room with a coded lock, but no worries — the walls were made of curtains and students were free to leave if they so desired.

The escape room featured hidden maps of the university, cryptic quotes, secret dates and scattered puzzle pieces where students put their brains to work and learned more about the campus by doing so.

The escape game room was designed by Alex Boris, who works in the Learning Commons of Hodges Library.

“I designed the escape room to feature the university as a whole to get new students familiar with our campus,” Boris said. “After COVID had everyone virtual for so long, I thought this would be a great hands-on, tactile learning function for the students.”

As it turns out, it was a great idea. On the first day, the escape room saw nearly 60 new students. And on average, about 30-40 new students participated per day until the end of the event. That’s approximately 500 new Vols reached in a two-week period.

The escape room wasn’t designed to be hard or impossible to solve. Its sole purpose was to get students to interact with other people and their campus. Boris says only 30-40% of the total students throughout the event were not able to break Smokey out.

However, the first 250 students who managed to save UT’s beloved mascot won an exclusive prize consisting of custom UT tumblers and unique stickers for solving the hand-crafted puzzles and riddles.

“I really loved designing this, and I thought it was pretty creative as to how to get new students to engage with their surroundings,” Boris said. “It’s also a fun breather for students to take a break from the chaos of the first week of school.”

Perhaps Hodges Library has a few more events up their sleeve to create an inclusive atmosphere for all its Vols, new and old alike. With its signature look, the building is easily recognizable and has potential to host many more unique events.

WHAT’S UP VOL NATION! It’s time for the Weekly Wrap-Up with Sami Roebuck---- @Sami_whamiii Catch up on everything that happened this week on UT's campus!