Skip to main content
You have permission to edit this article.
Edit
Covid-19
News
Opinion
Sports
About Us
Advertise
Work for Us
Events
Send us a Tip
1 of 2 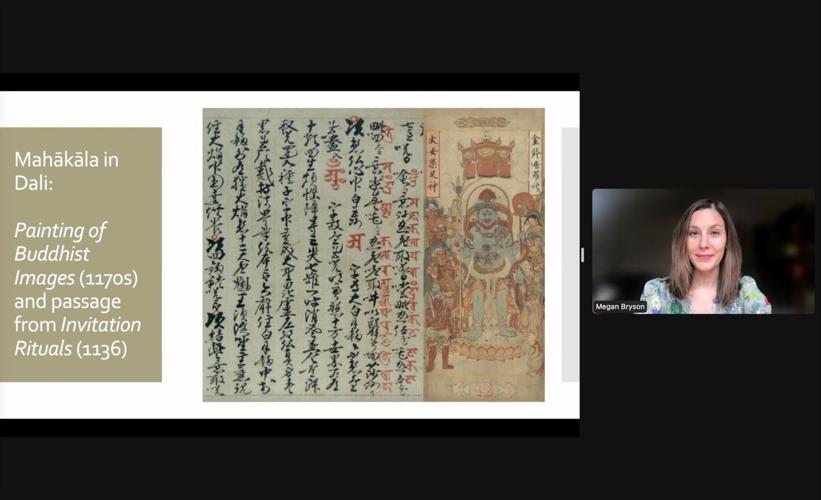 On April 28, 2022, Megan Bryson, associate professor of religious studies and scholar of Buddhism, presented research conducted during her year as a 2021-2022 Humanities Center Fellow. 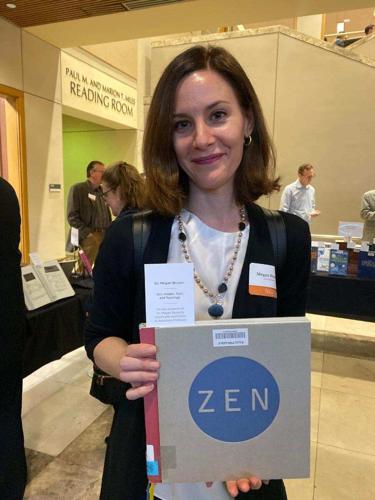 Meg Bryson honored at the UT bookplate ceremony on Oct. 28, 2019 with a promotion to Associate Professor.

For the last year, Megan Bryson, associate professor and associate head in the department of religious studies, has taken a leave from teaching to work on a research project which focuses on the spread of Buddhism along silk roads in South Asia.

Her talk focused on examining the process of transmission on three different silk roads in medieval Buddhist Asia, research which is set to become a book titled “Buddhism on the Southern Silk Road.”

“Current interest in the Silk Roads stems from several factors, including the increasing connectivity of our contemporary world,” Bryson said. “As technology facilitates easier travel and communication across national borders, we face questions of what our national and regional identities mean. I hope that thinking about global networks in different places and times will help us think through global networks in our own places and times.”

Bryson has received national recognition throughout her career with her extensive research and studies on the subject of religion.

Bryson earned her PhD in the Buddhist Studies Program at Stanford University, becoming an assistant professor at UT in the fall of 2013. Her courses focus on Asian religions, such as Buddhism, Chinese Religions, Japanese Religions and East Asian religion more broadly.

When she was in high school, Bryson became interested in the subject of religion. After taking a world religions course she became intrigued not only in religious studies as a whole, but more specifically Buddhism. As an undergraduate, she focused her studies on women in Buddhism.

“I first became interested in Religious Studies when I took a World Religions class in high school. Buddhism particularly fascinated me because it seemed so egalitarian,” Bryson said.

“However, the more I learned about Buddhism, the more I realized that my initial impression was incomplete: Buddhism does include egalitarian teachings, but it also includes — for example — some pretty misogynistic teachings. This prompted me as an undergraduate to research attitudes toward women in Buddhism, and I ultimately wrote an honors thesis on the idea of the Blood Pond Hell — a hell for women — in Chinese Buddhism.”

Bryson hopes her students will use what they have learned from her courses to apply deeper thinking to religion. She works with her students to break down stereotypes surrounding many religions and allow them to begin seeing the complexity and diversity of religion and religious studies as a whole.

“In the classroom my main goal is for students to develop a robust conceptual toolkit for thinking about religion. This means going beyond stereotypes to understand the complexity and diversity within any single religion,” Bryson said.

“In the context of Asian religions, this involves grasping that there are many different ways to be Buddhist, Hindu, Daoist, Shinto, etc. and also being able to make sense of what these differences mean. I also want students to find and develop their own interests in the material, whatever they may be.”

Bryson’s impact at the university is not just limited to her students, but has reached faculty as well. Manuela Ceballos is an assistant professor in the Department of Religious Studies who has worked with Bryson since 2014 and has observed the impact Bryson has made on her students.

“Dr. Bryson can see potential and talent in people even when they might not see it in themselves,” Ceballos said. “She helps students see how they can accomplish things that they didn't think they were capable of, and does it very gently, respectfully, and with a great degree of professionalism. After taking her courses, students seem infinitely more curious and engaged with the world around them. These are, undoubtedly, great gifts.”

Ceballos has seen Bryson’s accomplishments in action. Among Bryson’s many national recognitions, such as her award-winning "Zen Buddhism and the Arts of Japan" exhibit and Alumni Outstanding Teacher Award, Ceballos touched on her accomplishments at UT with her students and coworkers. Bryson seeks to help her students reach their full potential, as well as working with her coworkers in the same regard.

“Since I've known her, her research and teaching have been recognized nationally — through an ACLS fellowship, one of the most prestigious in the humanities — and at the university-level, through multiple teaching and research awards,” Ceballos said.

“Beyond these well-deserved recognitions, she works closely with students to further their own research and life goals, and she supports her colleagues so that they can be the best teachers and mentors that they can be. I'm not sure how she has the time or energy for all of that, but she helps us all thrive.”

Amid the next steps in her extensive career as a researcher, Bryson discussed why she is passionate about the study and teaching of religion to begin with.

“Religious Studies is concerned with how people find meaning and purpose in — and beyond — the world, and also how people actualize this larger purpose,” Bryson said. “The latter can involve embodied practices, material objects — including texts — , social relationships and institutions. In short, the study of religion is the study of what matters to people and what they do about it, which I think is vital for understanding what it means to be human.”