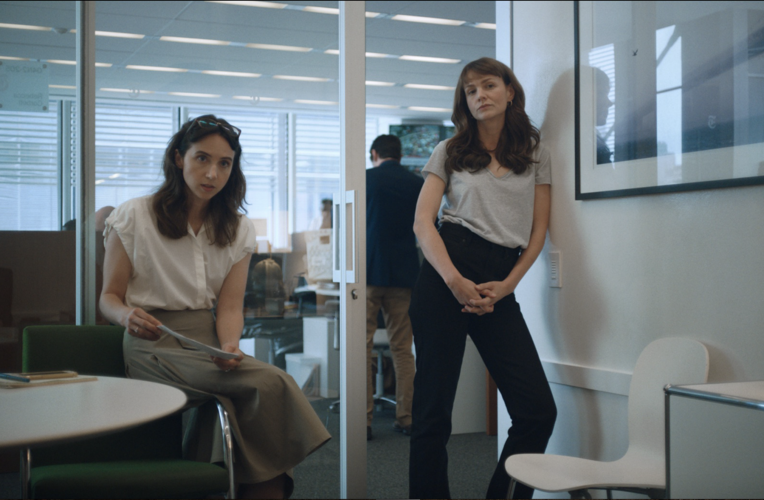 There’s a scene near the beginning of “She Said,” Maria Schrader’s adaptation of the best-selling book by the same name, where investigative journalist Megan Twohey returns to work at The New York Times following maternal leave. Twohey, played by the brilliant Carey Mulligan (“Promising Young Woman,” “The Great Gatsby”), takes time away from reporting on harassment allegations against then-candidate Donald Trump in order to have a baby.

Early in the film, she rocks a cradle in the dark of her home, a mother who answers calls from a colleague while she plunges into postpartum depression alone. But when she returns to The New York Times office in Midtown – a filming location for several sequences – Mulligan basks in the sunlight slanting through the windows and reflecting off the neat white lines of editorial desks. The office is her true home. She is back where she belongs and her domestic depression is largely behind her.

Well, it should come as no surprise: the Times is the salvific figure of the film, which chronicles how Twohey and her colleague Jodi Kantor, played here by a guileless Zoe Kazan (“Olive Kitteridge,” “The Big Sick”), broke the Pulitzer-winning story on producer Harvey Weinstein’s decades of sex crimes. The Times is the third elite star of the film, which focuses on the working life of Twohey and Kantor as they convince abuse victims to go on the record. Sometimes the glimpses into the work feels fresh, as in office talk about the specter of Ronan Farrow, and sometimes it gets stale, as in lengthy restaurant meet-ups with lawyers and execs. But viewers get an intimate portrait of what it’s like to work on the top story at the top paper in the world.

It’s not a pretty image. There are doors slammed in Mulligan and Kazan’s faces and mysterious black SUVs that follow them on city streets. They cry as sources detail their darkest traumas. They arrive home from work late to find exhausted husbands, sleeping children and marital tension. By the end, they’ve been threatened over the phone and in person by Weinstein himself (played by Mike Houston and seen only briefly from behind.)

Schrader and Rebecca Lenkiewicz, who wrote the script, do not reproduce sexual assault on screen, nor do they even add much information to the story that could not be gleaned from original reportage. The ideal viewer for “She Said” is a rare kind of person – somebody fascinated by the minutiae of investigative journalism who also knows very little about Twohey and Kantor’s work. If there is freshness to the film, it lies not in the facts of the reporting but in the network of women, including Times investigative editor Rebecca Corbett (played by a steely Patricia Clarkson), who give incredibly moving performances.

Samantha Morton is arresting as Zelda Perkins, Weinstein’s former personal assistant who signed an NDA after accusing him of sexual assault. Jennifer Ehle lends an earnest pathos to her portrayal of Laura Madden, an Irish woman who once worked under Weinstein and whose hotel horror story follows a now familiar pattern. As she sits on a gorgeous beach in Cornwall across from Kazan, Ehle recalls in heart-wrenching fashion the shame she felt after she was abused. She thought all the other women Weinstein had harassed had said no to his sexual advances.

These moments of emotive revelation give “She Said” its reason for being, which might otherwise be less apparent. The story is in the powerful bond between Mulligan and Kazan and the women whose trust they slowly gain. Source after source, including Ashley Judd (the only person to play herself in the film), tell the reporters that the problem goes far beyond Weinstein, that it is in fact systemic. On this side of the Me Too movement, we take the existence of the system for granted. But the film takes pains to prove that bad men are not all as powerful as Weinstein. In one scene, Mulligan cusses out a bar-roving creep who tries to pick her up as she meets with Kazan and Clarkson.

Mulligan is gritty while Kazan is vernal. The portrait makes sense given the actors. Mulligan imagines Twohey as a no-nonsense, cursing, give-me-the-phone-I’ll-talk-to-Harvey veteran of the field and Kazan comes across as a sweet-faced fledgling, who in a particularly stressful moment wishes that she “smoked or something.”

Even a cursory look into the journalists' biographies or joint interviews reveals the heavy-handedness of this approach. Kazan is known for her meek aw-shucksity, which led her to an Emmy nomination for her role as the “mousy” Denise Thibodeau in the HBO miniseries  “Olive Kitteridge.” Her persona does not breathe truth into the depiction of Kantor, or of Twohey for that matter. (Twohey, it should be noted, is the younger and more smiley of the two in public interviews. But Mulligan’s extended stare at Weinstein when he visits the Times office, worthy of a lengthy zoom shot, is also worth the price of the ticket.)

And as for the ideal viewer of the film? Perhaps I am that person. I can remember the first time I stood in front of the massive metal nameplate of The New York Times building and thought I wanted nothing more than to see inside that office. Now I have, and I must say, it’s beautiful but completely exhausting.