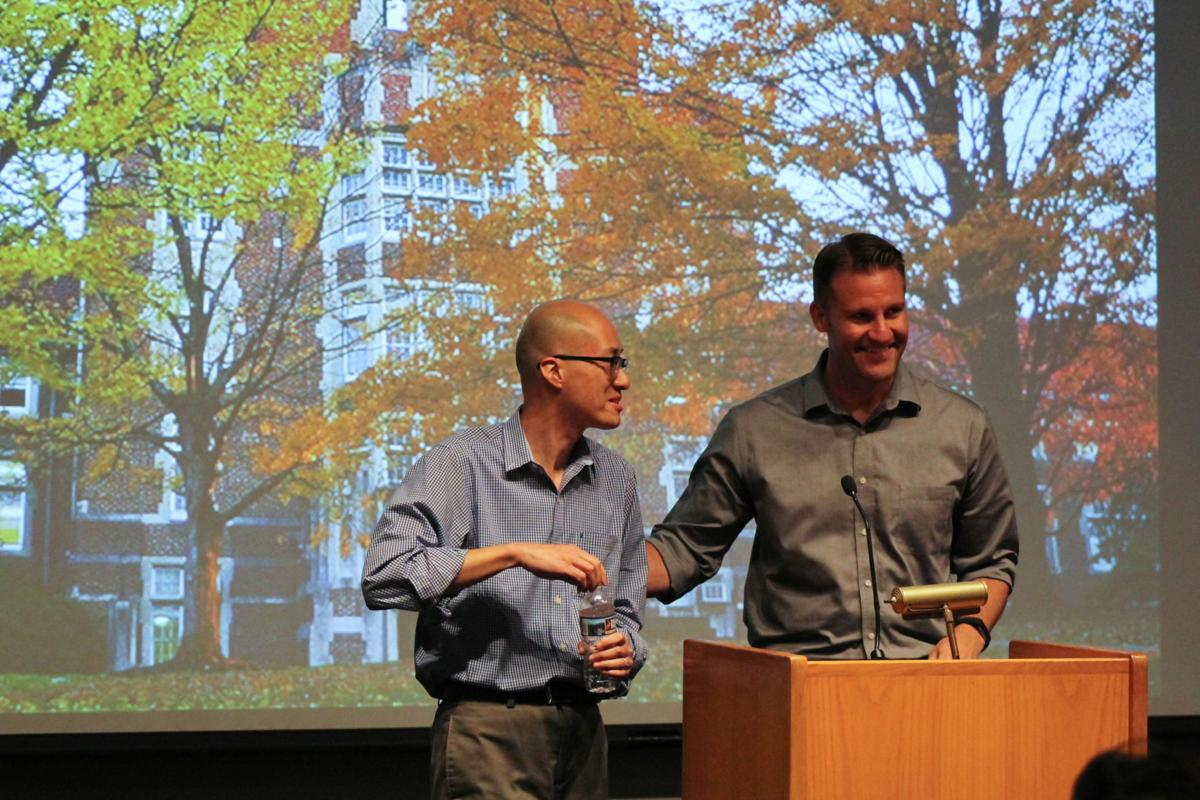 Jesse Goolsby and Michael Shou-Yung Shum talk about their experiences as UT. Each are alumni who have become published authors and present their work during Writers in the Library on October 2nd, 2017. 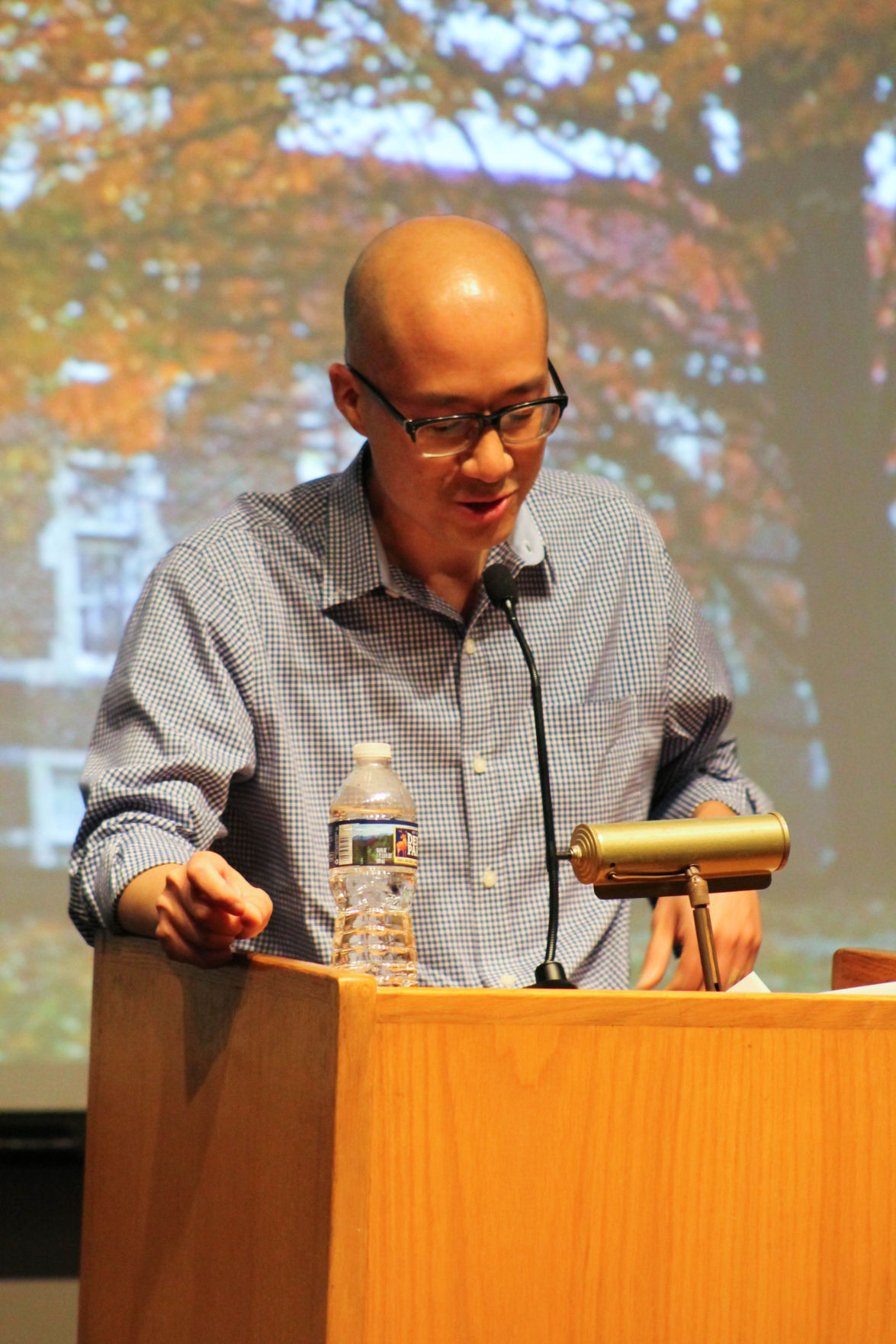 Michael Shou-Yung Shum reads from his novel, "Queen of Hearts", on October 2nd at Writers in the Library. 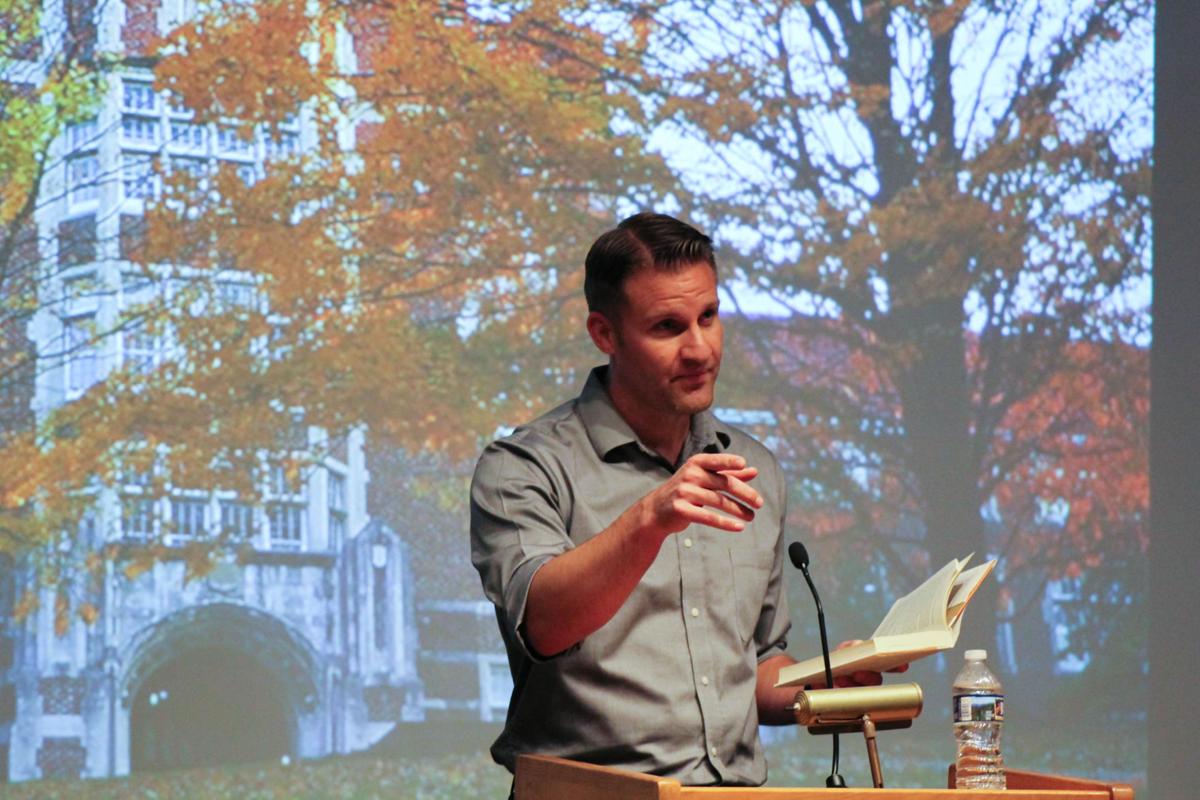 Jesse Goolsby, UTK Alum, reads emotional passages from his new novel at Writers in the Library on October 2nd.

Jesse Goolsby and Michael Shou-Yung Shum talk about their experiences as UT. Each are alumni who have become published authors and present their work during Writers in the Library on October 2nd, 2017.

Michael Shou-Yung Shum reads from his novel, "Queen of Hearts", on October 2nd at Writers in the Library.

Jesse Goolsby, UTK Alum, reads emotional passages from his new novel at Writers in the Library on October 2nd.

The second Writers in the Library lecture of this semester took place Monday night at 7 p.m. in the Lindsay Young Auditorium of Hodges Library, featuring writers Michael Shou-Yung Shum and Jesse Goolsby, who both were presenting their debut novels.

With only about 30 people in attendance, the turnout was not huge, but the audience made up for the small attendance, excited and happily conversing with each other and the authors beforehand.

Erin Elizabeth Smith, Jack E. Reese Writer-in-Residence at UT Libraries, started off the night by explaining the event to first-time attendees and talking about upcoming events in the series.

Michael Knight, professor of English, introduced the writers, both of whom he worked with in their graduate studies. He was full of praise for the authors.

“Both Jesse and Mike arrived at UT more or less fully formed … their power already on display,” Knight said. “It is, however, an equally great witness to watch the rest of the world see what we at UT have known for some time now.”

Goolsby is a U.S. Air Force officer whose works of fiction and essays have appeared in multiple publications. He holds a master’s degree in English from the University of Tennessee and a PhD in Creative Writing from Florida State University.

His novel “I’d Walk with My Friends If I Could Find Them” tells the story of three soldiers trying to find their way in life after facing countless horrors in Afghanistan.

Before beginning, Goolsby warned the audience, “I’m going to scream twice, so you should just be aware of that.”

“One of the reasons why you’re here is because you believe in art and the power of the imagination, and because of that, you and I are friends already,” Goolsby said to the audience.

His readings from his book were dramatic and passionate, including his promised screaming.

In between his two readings, Goolsby provided the audience with his personal experience with the subject matter.

“That visceral, ever-present nervousness, when your life is on the line and you’re 18 years old, can be transformative,” Goolsby said. And as an active duty officer, I’m here to tell you that they do an incredible job.”

Shum holds a Ph.D. in psychology from Northwestern and a Ph.D. in English from the University of Tennessee. Between earning those degrees, he dealt poker in a casino in Lake Stevens, Washington, which was the inspiration for his book. He also toured the country as a rave DJ.

His book “Queen of Spades,” takes place in a Pacific Northwestern casino with a wild cast of characters that showcase his creativity as an artist.

In a chilling and mysterious voice, Shum read from the introduction of his novel the story of a poker dealer named Chan and told the story of how this book came to be.

“During breaks, we would discuss in the employee lounge the books we read ... This mutual interest in literature, not uncommon amongst the dealing class, became a personal confidence,” Shum said. “For Chan, taking care and paying attention were foundational for establishing congruence with the universe.”

Shum also read from a later chapter of the book.

“What we think of as chance or probability has been grossly misrepresented ... What I have discovered is that specific and reliable patterns do arise in situations when reliable outcomes are highly constrained,” Shum said. “So there is no such thing as a mathematically independent event. Everything coheres with what happens before and also what happens after.”

The authors held a question and answer session after their readings, which the students and faculty in attendance enthusiastically participated in. Then the writers stayed behind after the event to sell books, sign fans’ copies and talk to them about literature.

The next Writers in the Library speaker will be Stanley Plumly, and the discussion will be held Oct. 23.