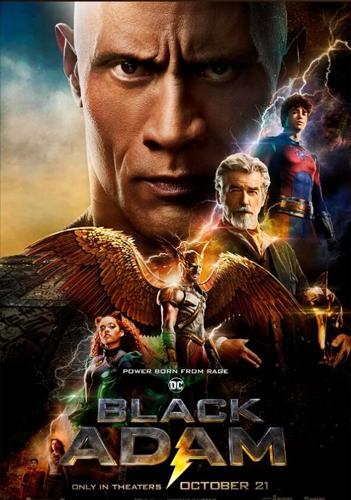 After what might be one of the most bizarre marketing campaigns I’ve ever seen, the highly anticipated, if you can call it that, “Black Adam” film has hit theaters. Possessing the same level of depth and intelligence of a “Fast & Furious” film, “Black Adam” essentially adopts the same narrative theory of “loud cars go fast.” In truth, sometimes that’s all a superhero film needs. I’d like to make my bias against superhero films clear, as I find them particularly soulless and factory-made. While the comic book industry offers a plethora of intelligent stories and enthralling narratives, the accompanying films always appear to miss the mark of posing important questions and dilemmas to their viewers.

This issue is especially apparent in “Black Adam.” While the film does display some fun adrenaline-pumping action sequences, the movie is just plain dumb most of the time. The overarching story constantly reminded me of playing with toys as a child. “What if this character showed up,” or “it would be cool if these characters fought,” is the central theme of the movie. It pretends to be intelligent through the main protagonist’s questionable methods, but the film just insists upon itself. Here’s a fun game to play: take a shot every time the movie reminds you that “Black Adam is not a hero.” You’re guaranteed liver failure before you make it to the end credits. And that’s something the movie does for its entire runtime. It tells you what to think. Characters tell you what’s happening in every scene. The movie even opens with a boatload of exposition that’s just plain yawn-inducing.

The plot is straightforward. Entering the enslaved Middle Eastern nation of Kahndaq, thousands of years ago, we meet a young revolutionary who is granted unimaginable power in order to save his people. He’s known as Teth Adam, played by Dwayne “The Rock '' Johnson. Five thousand years later, he’s awakened once again to liberate his people from a new group of oppressors. Some other popular DC superheroes are shoehorned in, in the name of fanservice, and they fight. DC fans should appreciate their appearances. Dr. Fate specifically, played by none other than Pierce Brosnan, was a performance I looked forward to seeing. And unsurprisingly enough, Fate was one of the best aspects of the movie. Brosnan stood out from the others, despite having a cookie-cutter script. Dr. Fate is one of the coolest sorcerers in comics, but the narrative proves to be a disservice to the character. Audiences will already be drawing comparisons between Dr. Fate and his counterpart, Dr. Strange from Marvel’s more popular films. The movie does nothing to remedy this. In fact, most of Fate’s special effects look identical to that of Strange’s. On top of that, the writers copied and pasted the same plot device Dr. Strange had in “Avengers: Endgame” with his ability to see the future. It’s quite a shame, considering how unique Dr. Fate is as a character.

I try really hard not to compare movies to their comic book counterparts, but there’s so many missed opportunities that it’s impossible not to remark on the parallels. The narrative desperately wants Johnson to portray this anti-hero protagonist that makes you question his status as a protector of the people, but either way you slice it, he’s a tried-and-true hero. In the comics, Black Adam leans more towards being a villain, than an antihero. He murders his own son to steal the power needed to save his people, which is completely retconned in the film. It’s almost as if Dwayne Johnson refuses to make room for any significant character flaws. It’s Adam’s insane devotion towards his home country that makes him a morally questionable character. He is a protector, but he’s a selfish one at that. There is no “right and wrong” to the original character of Black Adam. But rather, the script follows the same boring theme of “misunderstood hero.”

Dr. Fate is another glaring example of this issue. If the movie truly wanted to make you question the morals of its characters, the script could have stayed true to Fate’s comic book counterpart. Serving no one but the lords of order, Fate has an obligation to “make things the way they were meant to be,” often putting him at odds with some of DC’s greatest heroes. He’s even had to kill off some of the good guys in the name of order. Wouldn’t that have served as a great conflict in the film? Wouldn’t it have fallen in line with questioning what is “right” and “wrong?” It’s certainly in theme.

There are some other heroes, but they’re not worth scrutinizing. Atom Smasher, played by Noah Centineo, is nothing new. It’s obvious that Centineo couldn’t care less about the role, making the character even more forgettable. Both he and Aldis Hodge, playing Hawkman, sound like they’re reading cue cards for the entire film. It’s somewhat hilarious. Cyclone, played by Quintessa Swindell, serves no purpose in the film. She has no character arc and does nothing but look silly when she’s using her powers. Most of the hero costumes look pretty goofy as well and could’ve used some more work.

The thing about playing with action figures is that at some point in your life, it was the most exciting part of your day. “Black Adam” is stupid, sure, but that’s why it’s a blast to watch. It’s cool seeing The Rock dart around the screen faster than the eye can see, disintegrating his foes with lightning. Adam’s introduction was also pretty awesome, excluding the needless “Paint it Black” segment. The action is fairly well choreographed. I’d honestly encourage more hero films to feature similar combat scenes, where the protagonists feel insanely powerful with their speed and strength. This is complemented by some decent CGI, which is much higher quality than anything Marvel’s been producing lately.

All in all, despite all its flaws, missed opportunities and overall silliness, it’s undoubtedly a fun film to watch. There are some slow bits, the dialogue is embarrassing and the characters are cliche, but you’re not always watching a comic book film to contemplate a more cerebral plot. If you’re looking for nonstop in-your-face action, look no further. “Black Adam” has you covered.