After coming off of a 5-7 campaign in 2018, there should be no games that the Tennessee football team takes lightly.

However, the Vols 2019 schedule appears much more manageable than it has in recent years, at least on the surface.

In the last six seasons, Tennessee’s early non-conference slate has included games against Oregon, Oklahoma, Georgia Tech and most recently, West Virginia. Stack those up against an already tough SEC schedule, and it is no mystery why the Vols have struggled for a postseason berth.

But this season, head coach Jeremy Pruitt’s second at the helm, the non-conference games of Georgia State, BYU, Chattanooga and UAB could help Tennessee reach bowl eligibility for the first time since 2016.

Despite the Vols not having to face the caliber of non-conference, Power Five teams that they’ve played in the past, the gauntlet that is SEC play remains and it is one Tennessee will have to find a way to survive if they want any kind of success in 2019.

With that in mind, here is a look at the Vols’ toughest games this season. 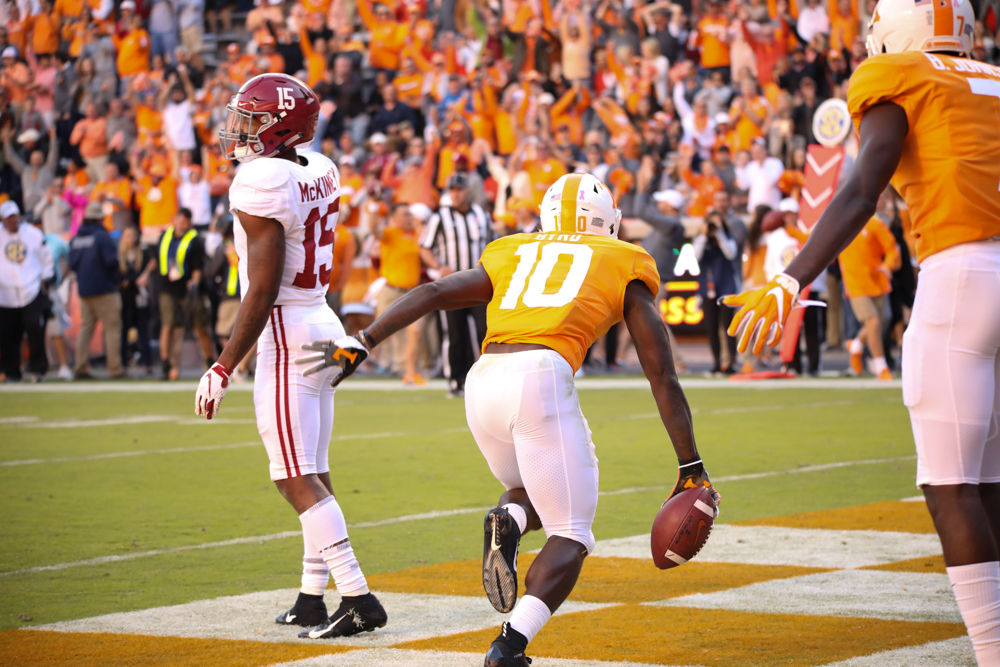 Tyler Byrd, #10, celebrates after scoring a touchdown against Alabama on Oct. 20, 2018 at Neyland Stadium. 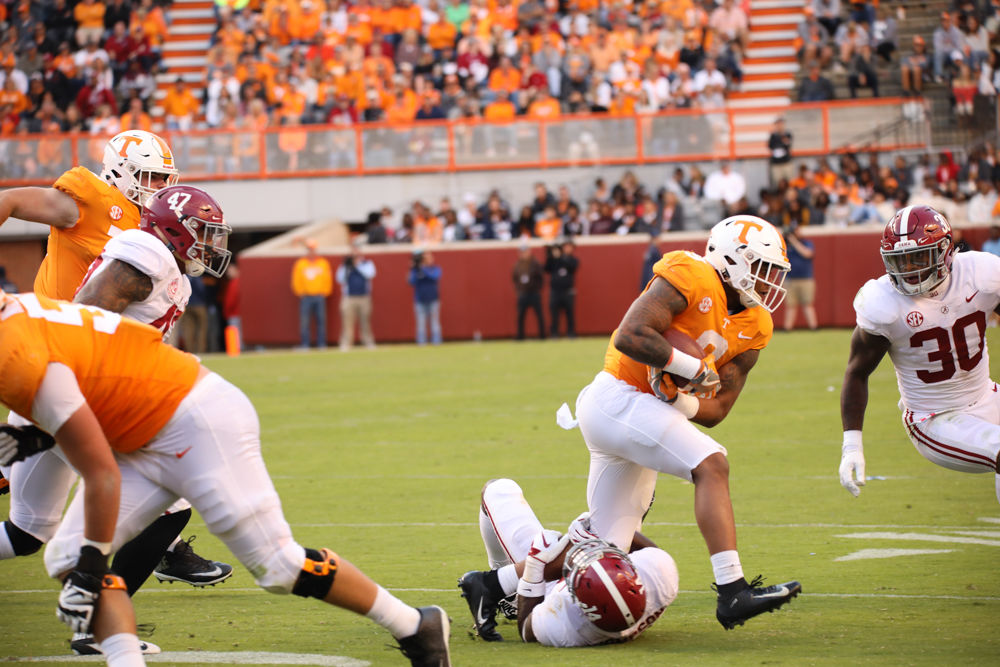 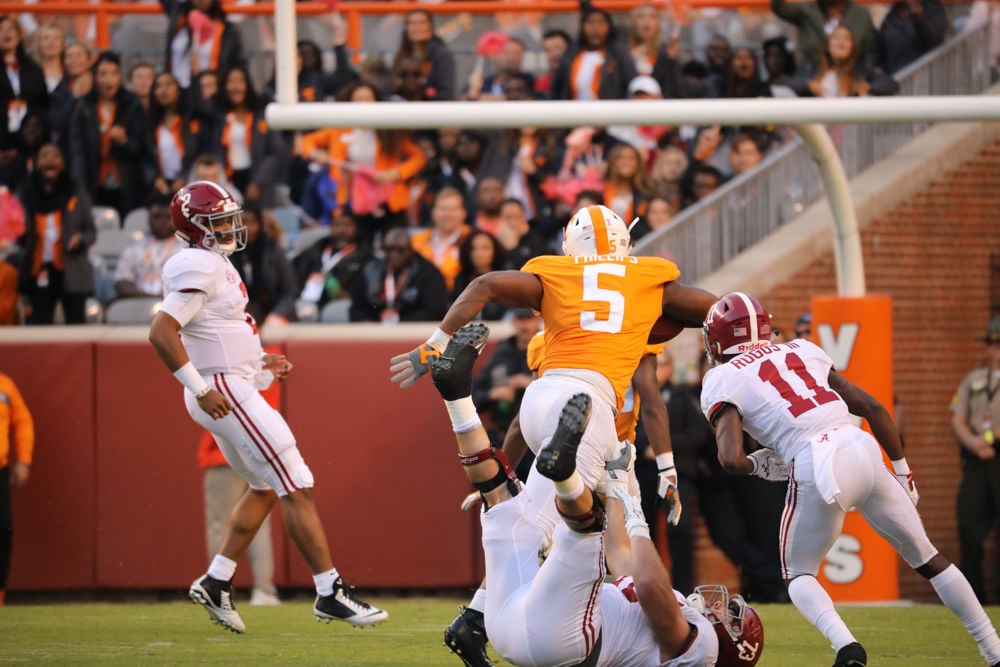 Kyle Phillips, #5, runs the ball during game against Alabama on Oct. 20, 2018 at Neyland Stadium. 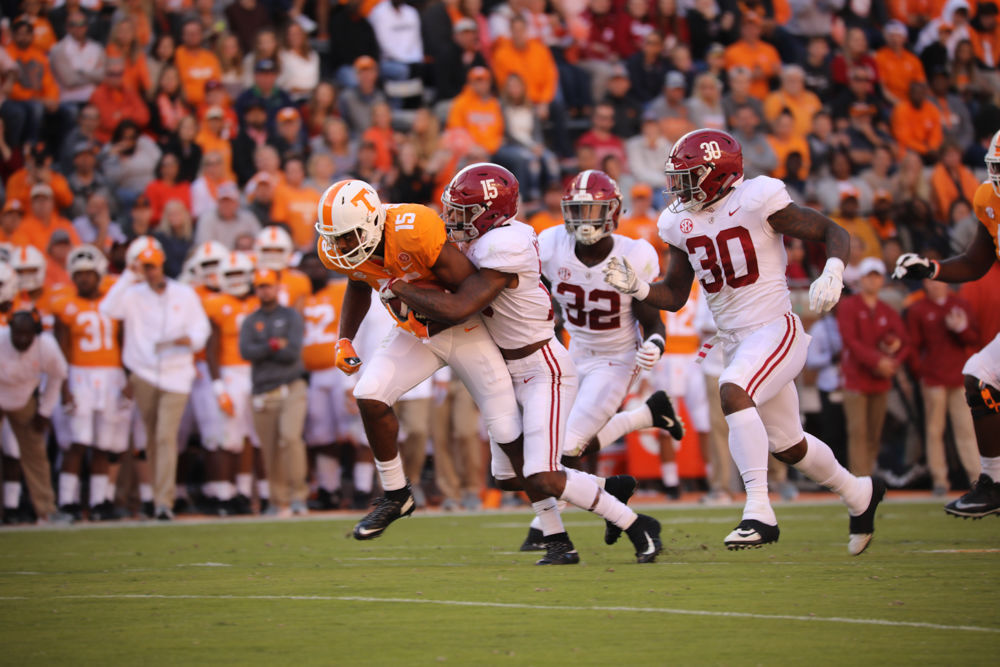 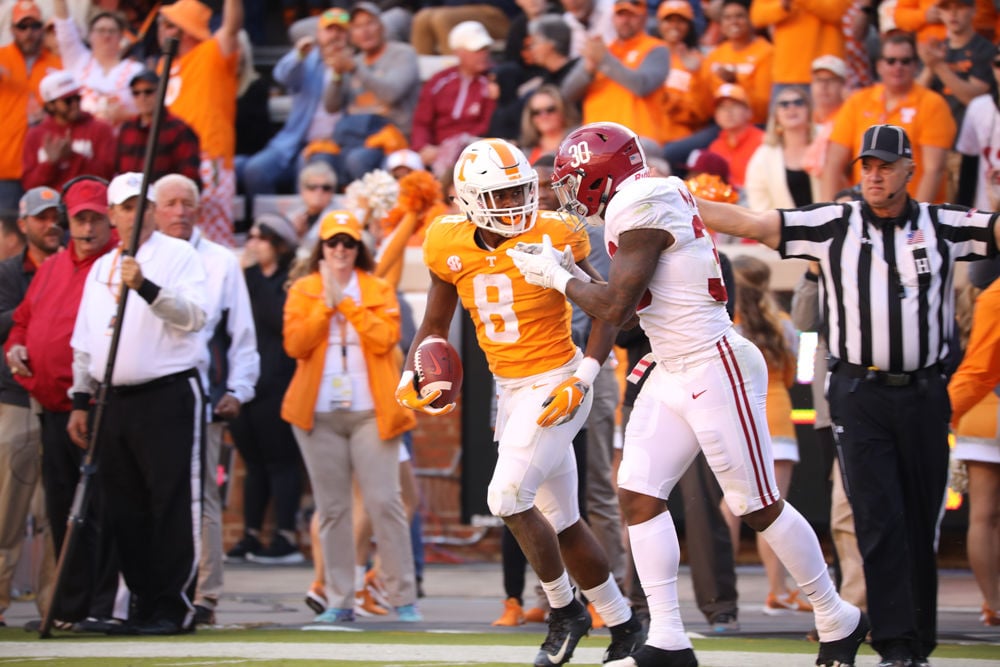 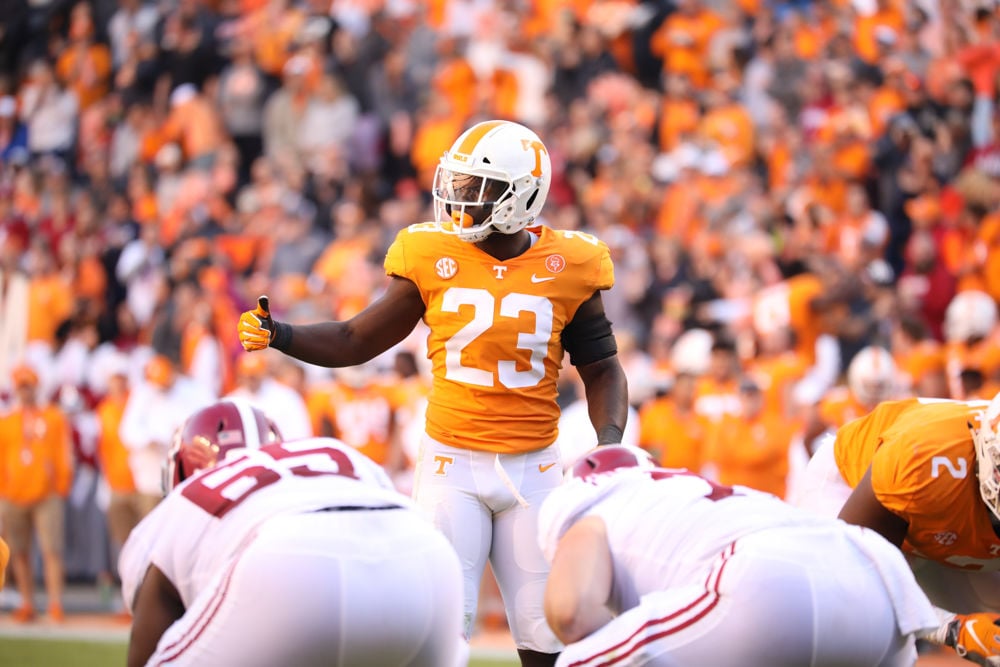 Tyler Byrd, #10, celebrates after scoring a touchdown against Alabama on Oct. 20, 2018 at Neyland Stadium.

Kyle Phillips, #5, runs the ball during game against Alabama on Oct. 20, 2018 at Neyland Stadium.

This game would most likely top any similar list. The Crimson Tide have set atop the college football world for nearly a decade now, and Tennessee hasn’t beaten their most historic and oldest rival since 2006.

If there is one thing that Nick Saban’s teams have proven, they do very well in ‘revenge’ years. After losing to Florida in the 2008 SEC Championship Game, Alabama bounced back to finish undefeated and win a national title in 2009. They did the same thing in 2011, 2015 and 2017 after missing out or losing in the national championship the year before.

The game being at Bryant-Denny Stadium doesn’t help matters either. After all, it’s a place that Tennessee hasn’t won in since 2003 and was demolished 45-7 in their last visit there in 2017.

Speaking of that 2017 season, Georgia last visited Neyland Stadium that year and handed Tennessee their worst home loss since a 45-0 decision versus Vanderbilt in 1905.

Since that game, the Bulldogs have emerged as one of college football’s premier programs, winning an SEC title and appearing in the national championship game that same season.

Last season, the Vols showed flashes of promise down in Athens against a Georgia team that wound up in their second-straight SEC Championship Game. After falling behind 24-0, Tennessee was able to make it a 24-12 game early in the fourth quarter before the Bulldogs pulled away to win 38-12.

This time, Tennessee will get Georgia at home, but the Bulldogs are primed for another championship run with players like quarterback Jake Fromm, running back D’Andre Swift and a talented defense back. The Vols will get a week off before the game, which should help, but Georgia will also be coming off of a bye when the two meet.

While they’ve come close in their last two visits to Gainesville, the swamp has been a place where Tennessee has found very little success in the last 20-plus seasons.

The last time the Vols won at Florida was under Phillip Fulmer in 2003. They also upset the No. 2 Gators there in 2001, but you’d have to go back to 1971 see the last time Tennessee won in Gainesville again.

But even with Florida’s dominance in this rivalry, the Vols have watched opportunity after opportunity to beat the Gators slip away. In their 2015 meeting, Florida scored on 4th and 15 down 27-21 from their own 37-yard line in the final minute to escape with a 28-27 win. The next meeting at the Swamp saw Gator quarterback Feleipe Franks launch a 63-yard touchdown pass as time expired to give Florida a 26-20 win.

Last season’s contest in Knoxville lacked near the same drama as six turnovers plagued Tennessee in a 47-21 loss. Florida went on to finish 10-3 and win a New Year’s Six Bowl.

The swamp has proven to be a difficult place to play for the Vols, and the Gators could also make major strides under second-year head coach Dan Mullen. This will once again be a tough matchup for Tennessee but also an opportunity for an early-season statement.

The game against Mississippi State could be difficult for Tennessee for a couple of reasons.

One, the Bulldogs return many of their top offensive performers from last season, as well as a solid defense. Secondly, the game is sandwiched between games versus Georgia and Alabama.

To make matters even more interesting, Mississippi State is coming off of a bye week themselves before traveling to Neyland Stadium.

The Bulldogs won eight games in 2018 but struggled with offensive consistency under first-year head coach Joe Moorhead. While they lose quarterback Nick Fitzgerald, they could possibly start quarterback Keytaon Thompson, who played in a backup role last season or Penn State transfer Tommy Stevens who has experience in Moorhead’s system during Moorhead’s days as Penn State’s offensive coordinator.

Mississippi State will also return leading rusher Kylin Hill who ran for more than 730 yards and four touchdowns in 2018.

This team should improve their offensive numbers this season and will prove to be a challenge at home for Tennessee’s defense.