The Daily Beacon doesn’t often take stances on issues, but when it comes to saving student newsrooms, an exception should be made.

Journalism, generally, is under attack like never before from politicians, finances and pundits. Whether it’s obvious or not, student journalism is feeling the brunt just as much — and in some cases, more.

Recently, the Independent Collegian, the University of Toledo's student newspaper, published a front-page editorial discussing its serious financial problems due to decreasing advertisement revenue and difficulties in paying its students. Also, the Daily Campus, run by Southern Methodist University students, recently announced that it was being forced to re-affiliate with the university due to its lack of funding. What the Daily Campus has had to do is an unfortunate capstone of the results of an attack on student media.

The Beacon has been lucky so far. While we, like most media, are dealing with financial straits, our university hasn’t tried to take away our independence. Our newest chancellor’s first campus stop was with the Beacon, and SGA has treated us fairly as of late.

This doesn’t mean we haven’t received some disapproving feedback from university officials, and it certainly doesn’t mean that we receive any of the money that we need. With advertising alone, we are hardly able to pay our staff writers, photographers, and videographers, designers, copy editors, and all of the other people that make the Beacon work. As far as editors go, each works at least one other job. In other words, it’s a sacrifice to work in student media.

Sure, there’s an argument that it’s good experience, and it is one of the best experiences a student can have at UT professionally and personally. But the sacrifice isn’t just for that experience; students also work with us because they care for our university and community. Beacon writers feel a sense of pride when they break news, tell a new story, or simply toss out a fresh idea. The Beacon is our platform, as a Volunteer community, to say what needs to be said, report on what no one is talking about and tell the stories that need to be heard.

If you can, please consider supporting us financially. We do not exaggerate when we say that every dollar counts. We understand that many of us cannot donate, so please, support us in word. Have our backs when administration or some other non-student party comes at us. Keep us accountable to keep our university accountable. Let us know what you want us to do. We’ve been UT’s student voice since 1871, and we want to keep it that way. 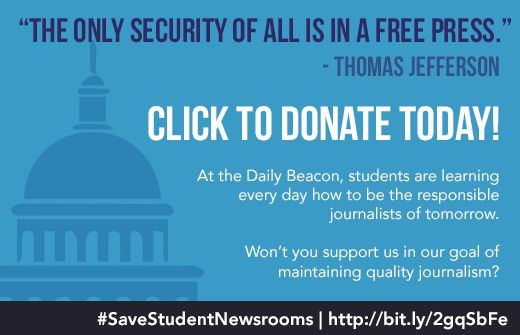