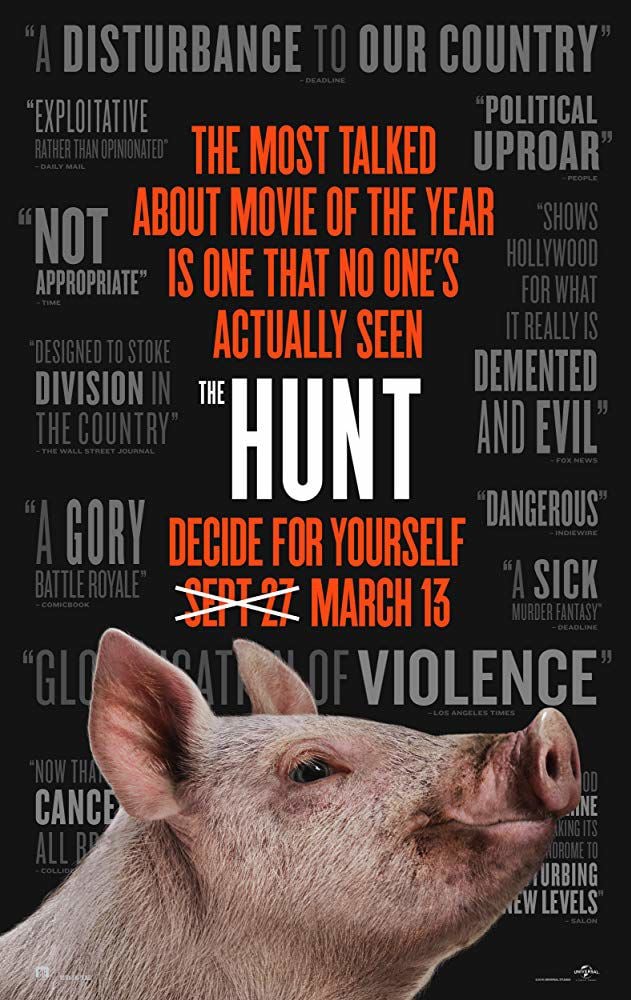 That was my main thought while watching “The Hunt,” a 2020 film directed by Craig Zobel. It stars Betty Gilpin, Hilary Swank, and Ike Barinholtz. The film is about 12 strangers that wake up in a clearing, only to find out that they are being hunted. It’s loosely based on the short story “The Most Dangerous Game” by Richard Connell.

In terms of filmmaking, this film is fine. There’s nothing egregiously bad, nor is there anything amazing. The structure is pretty basic, but it works. The writing is passable. The cinematography is fine. Nothing stands out in either direction. If anything, the two best parts about this film are the acting and the action scenes.

Betty Gilpin does a fine job in her role. Her character, Crystal, is cool, calm and collected; she knows what she’s doing in just about any situation. Gilpin is able to bring this character to life well and is the real driving force of the film. The other actors are fine too, mostly because they give their individual characters distinct personalities and voices.

The action is the other best aspect of this film. Whenever there is an action scene, it’s well shot, it’s well-choreographed and it’s fairly gory. It was one of the only things in the film that I wanted more of.

But this isn’t just a film about people being hunted. It’s also political, as the people that are being hunted are more right-leaning and the hunters are more left-leaning (which isn’t much of a spoiler because it’s revealed in the first 20 minutes).

However, this film is very centrist. To clarify, its viewpoint is that of the middle, neither left nor right on the political spectrum. Because of this, the film portrays both sides as equally bad. On one hand, the left are these bumbling morons that are more worried about not offending people than they are their own well-being (but they’re somehow able to execute this elaborate plan to kidnap and kill people).

On the other hand, the right are these conspiracy theory nut jobs that are obsessed with guns and are too stupid to figure anything out.

This makes the film boring, with a “both sides are bad” message that doesn’t land. Not even the over-the-top action and gore could make this movie enjoyable.

Ultimately, this is the movie’s main failing: it doesn’t commit one way or the other. It should have been either a politically charged film that went deeper into both sides and their ideologies, or it should have been a ridiculous and action-packed film about people hunting other people for sport. Instead, we got a film that’s surface level in its satire and an okay thriller at best.

Even though it’s well made from a technical aspect, the themes and subject matter in this film are half-baked. At the end of the day, this film tries to say a lot, only to say nothing at all.