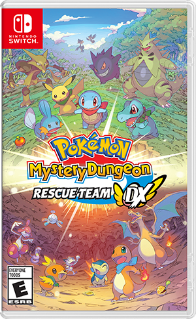 Pokémon is literally the most profitable franchise on earth. While the series is most well known for its series of RPGs on Nintendo handhelds and its anime television series, something so popular is bound to have spin-offs.

Like many, my first experience with “Mystery Dungeon” came with 2006’s “Pokémon Mystery Dungeon: Blue Rescue Team” on the Nintendo DS. This was one of my favorite games of all time, so you can imagine my excitement when I heard they were remaking the game, along with its Gameboy Advance counterpart, for the Nintendo Switch.

While I loved the original game as a child, I was a little worried about how the remake would hold up for adults. Now that I’ve played it, I can report that the game is still as fun as ever — in short bursts, at least.

“Pokémon Mystery Dungeon: Rescue Team DX” sees you taking the role of a human that wakes up one day as a Pokémon. After meeting a friendly companion, the two decide to form a rescue team, a group that helps other Pokémon in need. While the group initially only does small tasks here and there, they eventually become entangled in an adventure with the fate of the world on the line.

The reason I was so vague about which Pokémon are the heroes of the adventure is because each player could have two different Pokémon as the player or their partner. Sixteen Pokémon are playable, chosen at the beginning of the game through a personality test. Personally, I chose Squirtle as my character and Treecko as my partner.

The game’s plot is relatively simple. It’s perfect for younger gamers but might leave a little to be desired for anyone over the age of 13. The characters are incredibly likable and made me appreciate the Pokémon in the game more than ever before.

The game has been beautifully remade with a pastel, sketch-based art style that pops off the screen. It looks absolutely stunning in handheld mode, but looks a little muddy on a big screen. Either way, I’m a fan of this new art style.

One of the best things about “Pokémon Mystery Dungeon: Rescue Team DX” is its soundtrack.

The game remakes the original games’ soundtrack perfectly, with catchy tunes that will get stuck in your head and stay there for weeks.

The gameplay is where the game shines and falters. The bulk of the game’s time is spent inside 'mystery dungeons,' dungeons that are all randomly generated. While each floor of each dungeon is random, they all follow a similar pattern, so you probably won’t be too surprised by everything.

The dungeons are relatively simple, with players simply moving from one floor to the next while fighting enemies, collecting items and finishing rescue tasks. While fun at first, the tedium of battle and exploring can get a bit repetitive and old after some time.

Personally, I have a blast with this game. I’m not sure if this is due to the game itself or nostalgia, however. Revisiting one of my favorite games from childhood has been amazing, but I’m not sure other gamers will have such a fun experience.

Playing the game for longer than an hour at a time can get a bit boring. While younger gamers might be completely enthralled by the game, adults may have a harder time getting invested. If, like myself, you were a fan of the original games, this will be a perfect trip down memory lane and a great way to waste some time.

If you haven’t played the game before, “Pokémon Mystery Dungeon: Rescue Team DX” is a good introduction to the series, though its current price tag might be a little high. The game is a great way to spend some mindless time but, other than that, it might leave older fans a little disappointed.