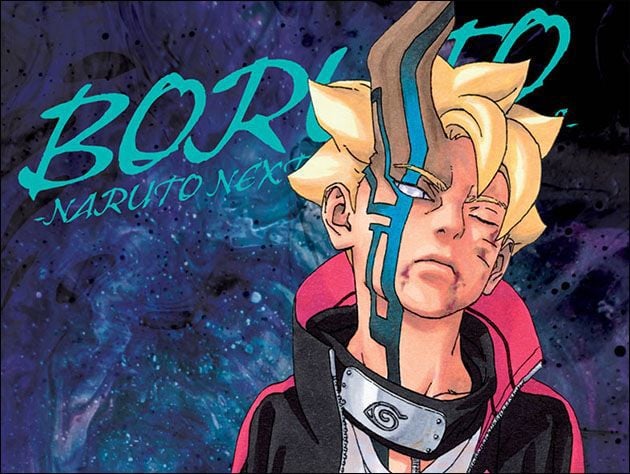 Taking over for Masashi Kishimoto, author Ukyo Kodachi and artist Mikio Ikemoto are generating a fantastic sequel series to the world phenomenon, “Naruto.”

This month’s chapter follow off the heels of the finale of the Team Seven versus Boro match in the alternate dimension, wherein the series took the jump from supernatural ninja combat to “Dragon Ball Z” in an instant.

This month started off in cool-down mode, with characters talking quietly with one another in the hospital, so you’d expect something pretty mundane overall.

Wrong. The second half of this chapter continues to blow everything before it out of the water. One of the most intriguing things that this series does over and over is delving into the mysteries surround the evil organization known as Kara. This is because as far as we know they didn’t exist within the original series, and the members that make it up are all insanely powerful, matches for even the strongest of the Akatsuki with ease.

There is an argument to be made that their existence at all doesn’t make sense and is a hindrance to the story. And I agree to an extent, but based on Kodachi’s track record so far, I trust that everything will eventually be explained in a satisfying way.

Regardless, this chapter capitalizes on the mystery even further by bringing into question their motives even further. In essence, this chapter is a master class in creating fascinating characters with gray moralities and making the reader obsessed with learning more about them.

For now, Kashin Koji will continue to be a mystery, but the character work with Kara scientist Amado was something unexpected. To keep it short, the individual motivations of all these “villains” is making a story far more compelling to read than the plots of the Akatsuki in “Naruto.”

Furthermore, Mikio Ikemoto’s artwork plays into that simultaneously, with a lot of subtle body language clues to just how cool and confident these characters really are, furthering their intrigue.

I really can’t remember the last I was so interested in an organization in a manga before, and this chapter is yet another reason thanks to Kashin Koji and Amado.

In terms of negatives, there actually is a mistake on page thirty-five with character art, that being a character being drawn without a particular item on their body that was crucial to the context of the scene, but that same object being firmly attached before and after that panel.

That’s not something major, and I didn’t even notice it during my first read through, but it’s at least an oddity that made it through the editorial process (it’ll probably be fixed when the chapter is released in tankobon format).