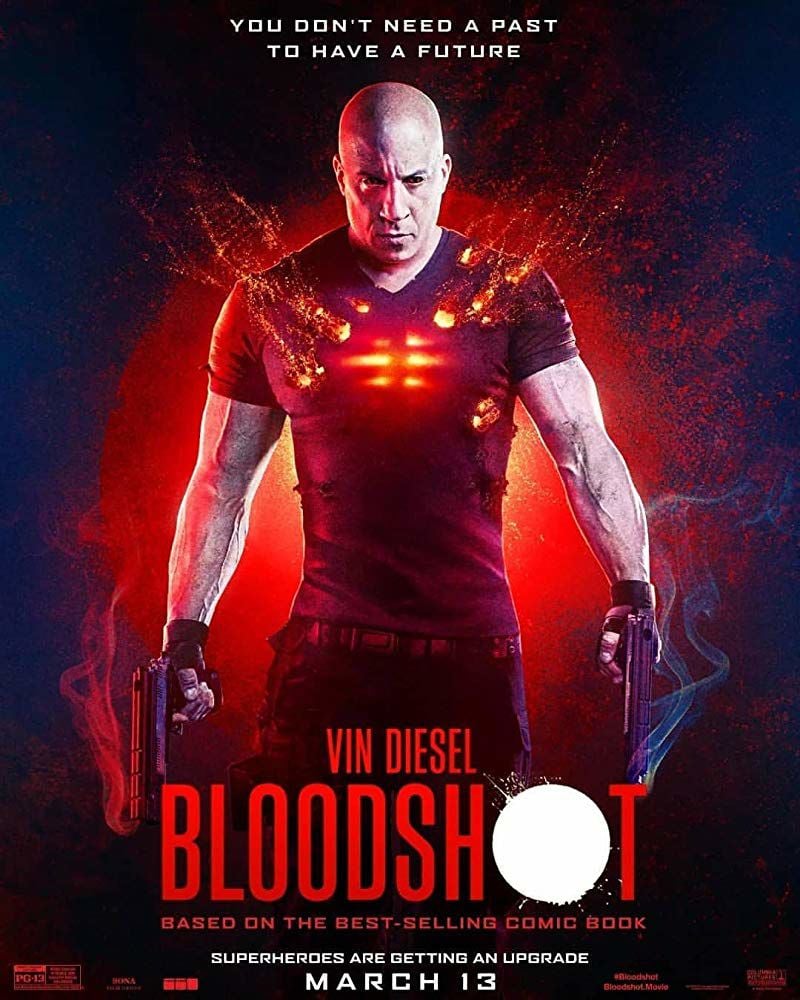 “Bloodshot,” directed by David S. F. Wilson, is a 2020 silver screen adaption of the “Valiant Comics” superhero of the same name.

The film follows a soldier named Ray Garrison, who, upon the murder of he and his wife, is experimented on by a company who aims to create cybernetic prosthetic enhancements, from sight for the blind to rapid regeneration from mortal wounds.

Ray just so happens to be lucky enough to be resurrected, complete with internal cybernetic enhancements that allow for total wound regeneration. He’s faster, stronger, and he’s on a mission for revenge.

I’m going to go on record and say that the beginning of the movie was probably the worst part during the viewing experience because of the cringe, clashing tone and technological feats that were utterly ridiculous. However, almost all of that was remedied and explained as the film went on and most of the issues I was having were fixed in the second act.

But as the film progressed a number of far more grating issues began to accumulate.

The most hindering aspect of the film was the characters. Very few of them had explained character motivations, and not a single character in the movie had their actual past’s expanded upon outside of a basic introduction.

This is the worst with the film’s antagonists, because I never got to understand why they were doing anything they were doing outside of the fact that the plot necessitated their actions. Others seemed to just be along for the ride despite being decent people.

The primary antagonist gets the worst of it, because he has no motivations to speak of. You could say his motivation is money, but themes of money and greed are not emphasized in the movie, to the point that you’d forget those things even exist in that world despite all the multi-billions of dollars in equipment flying around.

As far as I’m concerned the bad characters are what killed most of the enjoyment the movie had the potential to get out of you.

The one character I actually enjoyed was one who clashed with the tone of the movie, Wilfred Wigans. I found him to be rather funny and eccentric, but he too is totally lacking in character depth and motivation.

Dialogue can be tied into characters as they’re the ones that speak the lines, and there were a few funny lines (mostly Wigans), but some of it was excessively cringy for a movie that was tackling themes of unethical scientific practice and individuality.

In terms of action and CGI, there wasn’t much to write home about, and a lot of the CGI looked like video game graphics. It was jarring, because while those graphics don’t look bad in a video game, you could tell it was unnatural when paired with physical actors.

But I have to admit, I did think a lot of the technology and concepts in the film were really cool, but I also thought those same technologies and concepts were cool every other time I’ve seen them.

The film didn’t present anything that was new. That would be totally okay if it presented a cast of strong, likable characters and if the CGI held up, seeing as Bloodshot is a character from the 1990s. But as story that bleeds science fiction it sorely needs to present something new if it is going to be weak in other areas.

I didn’t hate the movie, though. I’d be happy to watch a sequel or further movies in a hypothetical “Bloodshot” cinematic universe.