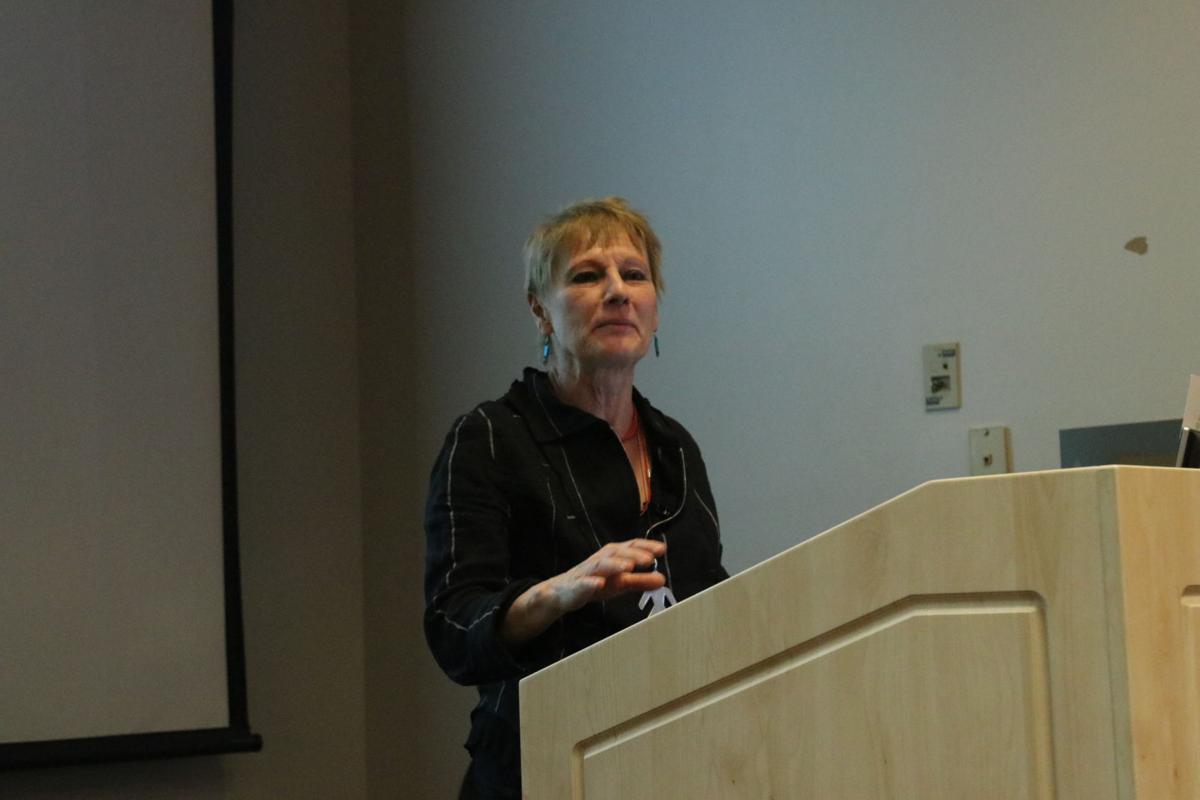 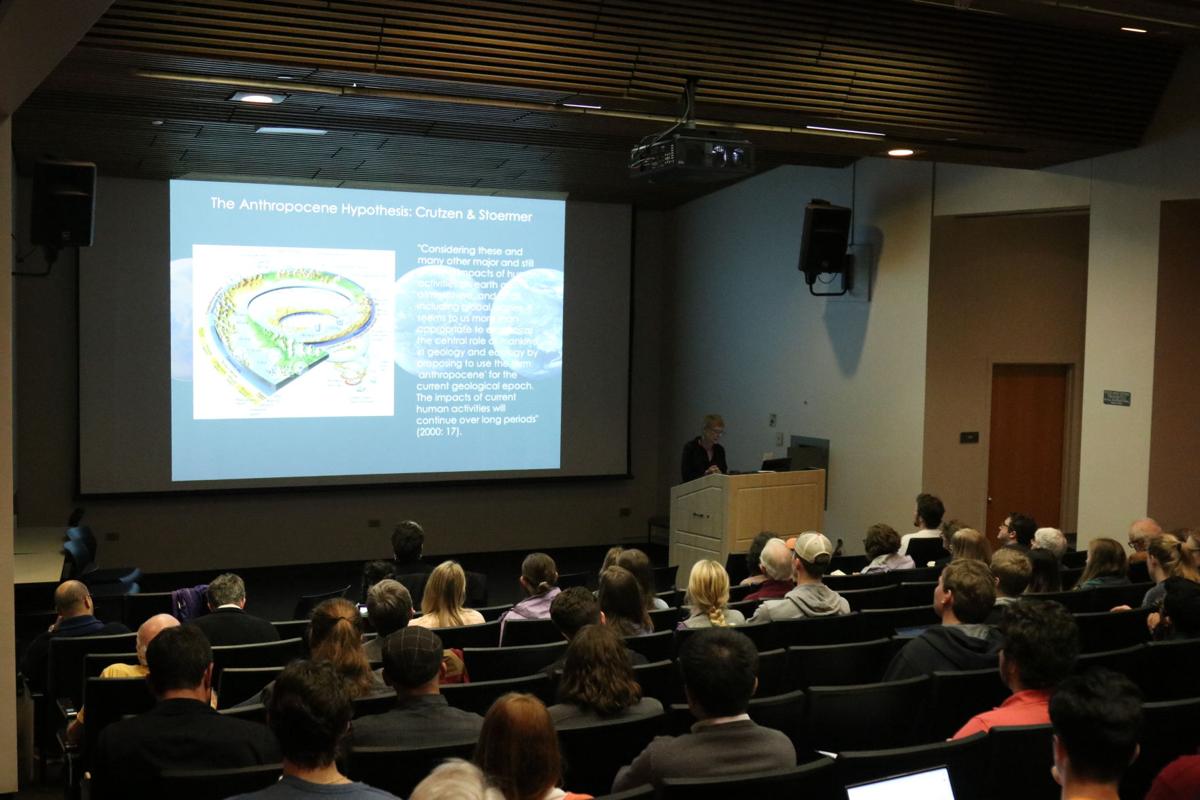 Perhaps unbeknownst to most, the arts and humanities can fit into the same sphere of climate change in surprising ways.

On Tuesday afternoon, Professor Ursula K. Heise from UCLA gave an enlightening lecture at the University of Tennessee on “Urban Narrative and Climate Change,” in which she delved into the subject area of climate change and how the topic is distributed through various media forms, particularly literature and film.

While being a very well-traveled and accomplished author, Heise is also the chair of the English department at UCLA and is the co-founder of the Lab for Environmental Narrative Strategies (LENS) at UCLA’s Institute of the Environment and Sustainability, according to UT’s event description of the talk.

Heise gave her take on the way climate change has been portrayed while referencing numerous scholars, authors and directors. She began with introducing the term “the Anthropocene,” which is an unofficial term for the current geological epoch we are living in, during which the focus is on human activities and how they impact us globally.

“The Anthropocene” is often used as a synonym for climate change, she explained, although it did not start out with that particular definition. For those who wish to research the subject further, one piece of literature she offered on the Anthropocene was “Why We Disagree About Climate Change” by Mike Hulme.

Later, Heise began to explain what she referred to as the Five Narratives About Climate Change, which are as follows: the narrative of nature’s decline, the apocalyptic narrative, the justice narrative, the agency narrative and the techno-optimistic approach.

For information involving the narrative of nature’s decline, she suggested taking a look at her book entitled “Imagining Extinction: The Cultural Meanings of Endangered Species.” The next narrative, the apocalyptic, focuses on the coming disasters that we may face, which she quipped would be some “cheery reading for the weekend.”

The justice narrative was one in which she referenced the terms “the Capitolocene” and “the Plantationocene,” which are words some have chosen to point a finger at capitalism and colonialism as culprits of climate change.

Toward the latter half of her talk, Heise mentioned the term “cli-fi,” meaning “climate fiction,” which was coined by Dan Blume in 2007. This term refers to a type of fiction centering on the climate and specifically climate change.

A climate disaster story that many know and love is that of the movie “The Day After Tomorrow.” These disaster stories tend to focus on a specific family who must face major natural disasters predicted by scientists, whose signs everyone else seems to ignore until it is too late.

The climate dystopia story includes climate change themes, but these do not constitute the entire focal point. They also look at diversity, violence and more, and they tend to have more pessimistic outcomes. As for books in this genre, Heise suggested checking out “The Windup Girl” by Paolo Bacigalupi.

Lastly, climate proxy stories usually look at an individual character who has been faced with a loss or unfortunate circumstance as a proxy for the decline of the climate, such as “Eistau” by Ilija Trojanow, which is about someone mourning the melting of their favorite glacier.

Brandon Matheny, a biologist who was interested in the topic of the lecture, offered his perspective on “cli-fi” and Heise’s optimistic suggestions.

“I had never heard of [the genre] cli-fi. Learning about that was pretty interesting,” Matheny said.

He added that he was able to form a more optimistic viewpoint about the earth’s future after listening to Heise’s talk.

“I tended to think, being a biologist, that the world is basically going to ‘hell in a hand basket,’ but there are some encouraging aspects that she shared from these works,” Matheny said.

Matheny then further considered how the talk had perhaps changed his view on things.

“Maybe I should be more hopeful,” Matheny said. “We might be able to adapt better or act on it than I thought, because I tend to have a more pessimistic view of the way things are going.”

Near the end of her lecture, Heise touched on the subject of “drowning cities” that many books and movies tend to portray when using the theme of climate change, so much so that it has almost become a cliché. These typically show a major city, such as New York City or Helsinki, becoming extremely flooded and “drowning.”

Heise gave a brief synopsis of the film “Nuóc 2030,” which translates to “Water 2030,” that is based on a future Mekong Delta in Vietnam that is on the verge of “drowning.” She suggested that while these types of films may be seen as an apocalyptic scenario for the global north, the issues are actually already happening in areas of the global south.

She showed an awfully haunting video clip from the end of the film in which the two main characters go on an underwater voyage to see a submerged Saigon.

To complete her talk, Heise decided to end on a high note by suggesting the book “New York 2140” by Kim Stanley Robinson. This novel is an optimistic one that sees a future New York City as a sort of “SuperVenice” in which they live in an “optopia” – the best society you can achieve given the circumstances.

Bethanie Bergman, a sophomore in business, also gave her thoughts on the surprisingly optimistic ideas Heise had to share.

“I found the lecture very enjoyable,” Bergman said. “Being an optimist myself, I really found it interesting that the talk was focused around the more optimist approach of climate change rather than the approach that we are given most often, which is the pessimistic side of things.”

Ursula Heise’s talk regarding the “Urban Narrative and Climate Change” gave new insight on how climate change is explained through books and film and showed that we do not always have to look at climate change with an entirely negative view.