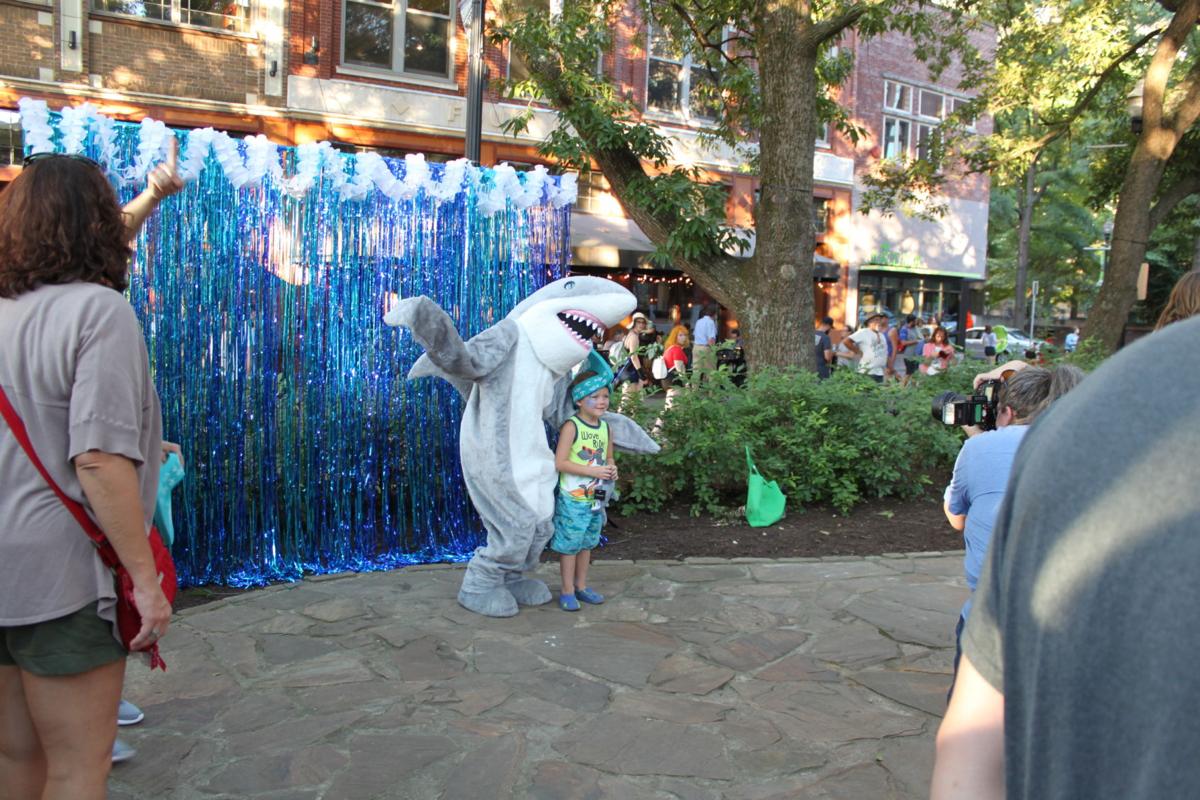 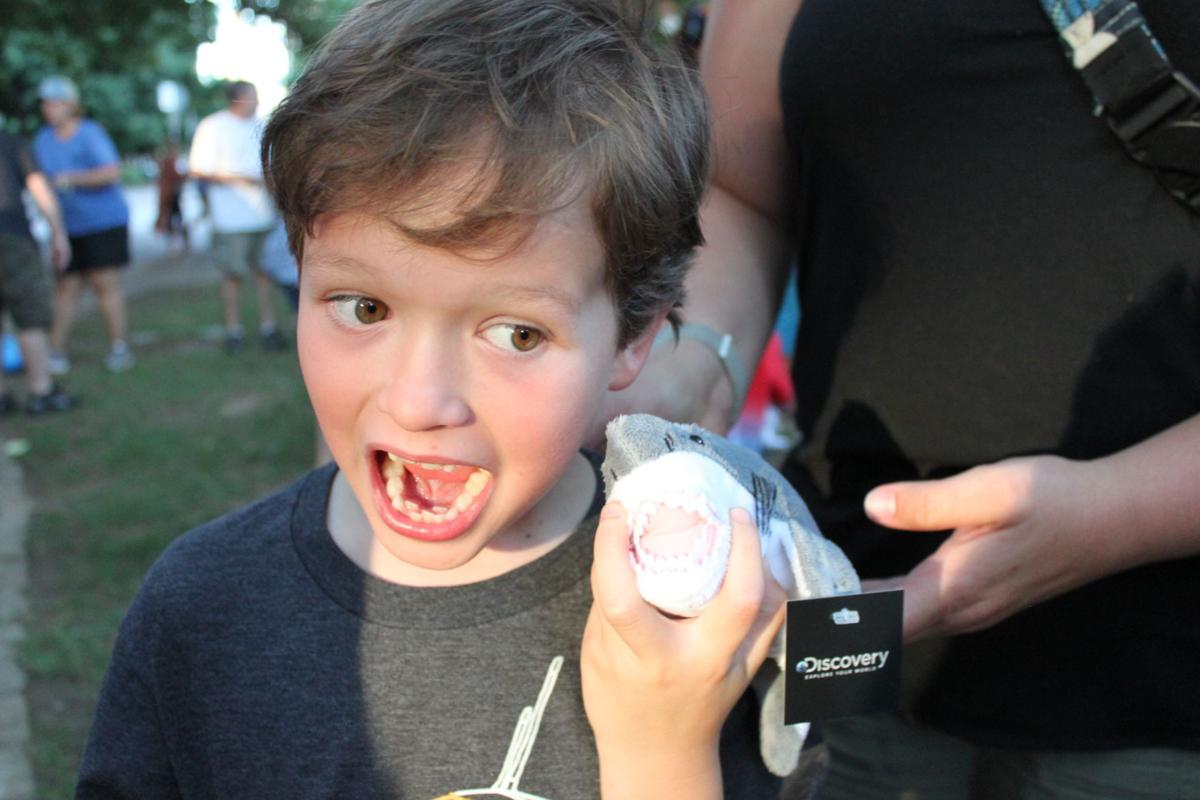 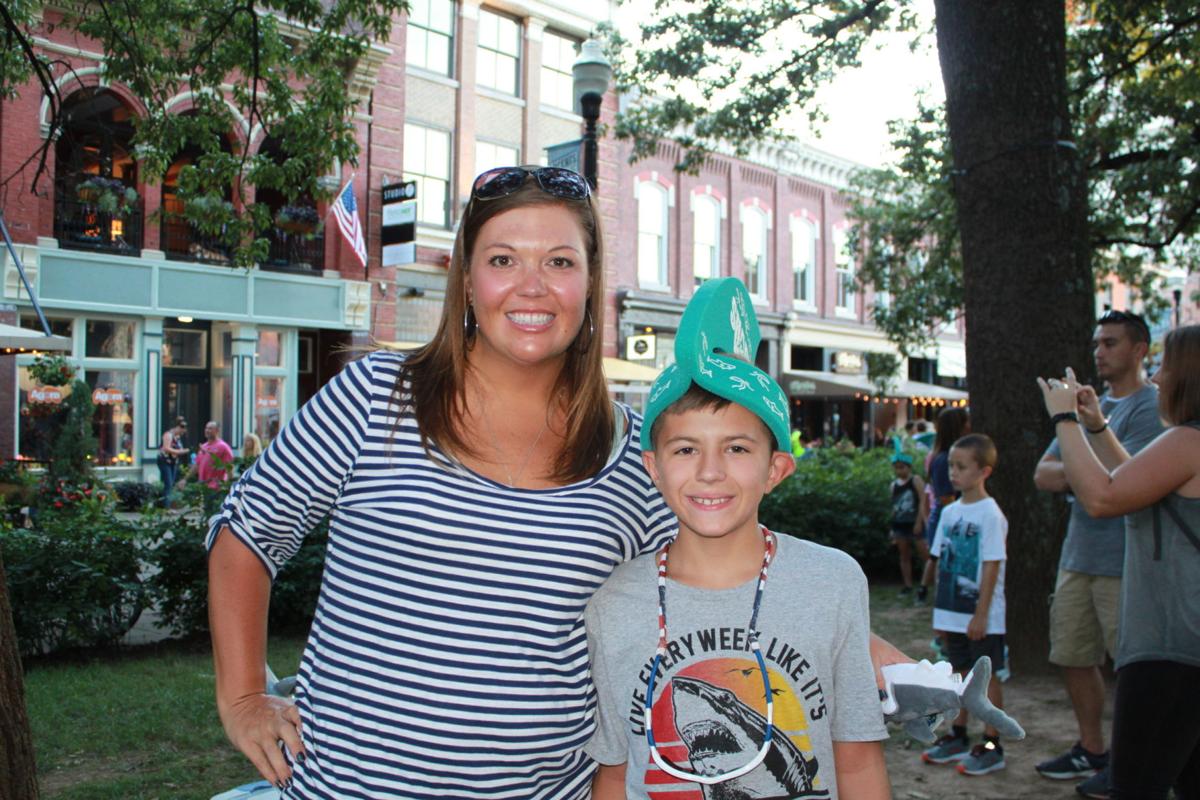 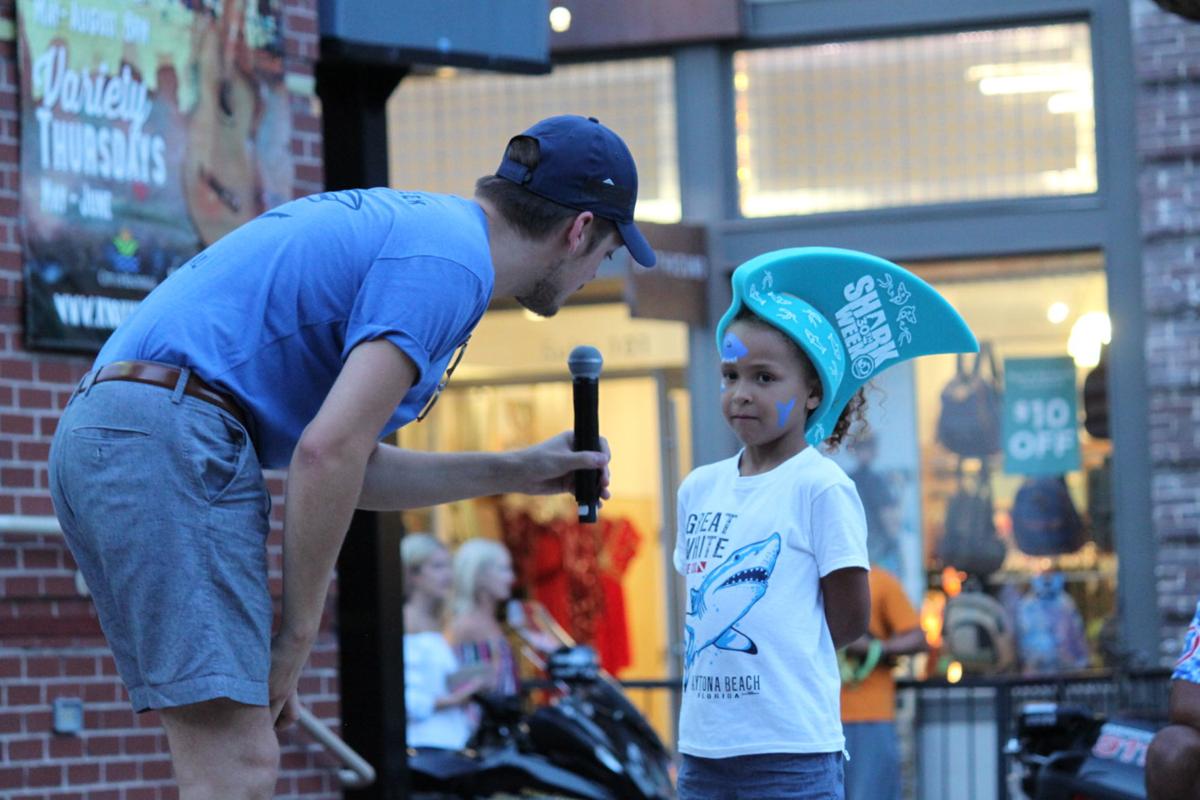 An evening celebration downtown had some unusual guests of honor.

Hundreds of shark lovers descended on Market Square at 8 p.m. Wednesday for the Shark Week Family Fun Fest, a community event designed to kick off the 30th year of Shark Week, which airs on The Discovery Channel. The annual television event features eight days of shark-centric specials, according the channel’s website.

Families were then directed to the small grassy section in the back where the line of people waiting to partake stretched almost the length of Market Square.

The first stop was a photo opportunity with Chompie, the Shark Week mascot.

The line twined and curled around the lawn. Participants played carnival-like games where everyone was a winner. Volunteers handed out stuffed shark toys, foam fin hats, mechanical wind up sharks, and insulated can coolers branded with the Shark Week 30th anniversary logo.

The Family Fun Fest was free to the public and a family-oriented affair.

Nine-year-old Luke Harper and his mom, Karol Harper, arrived downtown early in order to get a prime spot on the square. Luke, who favors the great white shark, has even spent time at the beach looking for shark teeth. He didn’t find any, but that didn’t dampen his love of the beasts. He still thinks sharks “just look too cool” as he played with the prize he had just won at the ring toss game.

The Fest also attracted local youth shark expert, Tyler Chaperon. Chaperon, 11, has loved sharks since he was 2 years old. He watches Shark Week all week long every year. He especially likes the shows where they tag Great Whites, and his favorite shark is the extinct Megalodon shark.

“I really know a lot about sharks,” Tyler said. “Every shark week I usually grab a pen and paper and write down new stuff I like ... I really like how they tag the Great Whites near the Australian coast and Massachusetts.”

Missing the festival was not an option for Tyler, said his mother Brandy Chaperon.

“We were actually at a water park earlier, and we had to leave at 3:30 to get home, to take showers to come here. So he cut water off, in the summer, for Shark Week,” Chaperon said, remarking on her son’s persistence and his love of apex predators.

After games and activities, the audience was invited to set up blankets and lawn chairs to catch a preview of “Bloodline: The Spawn of Jaws,” a Discovery Channel feature that follows scientists as they tag Great Whites off the coast of Montauk, New York.

While landlocked Knoxville might seem like a strange place to host a festival featuring sharks, it actually makes perfect sense.

The festival was hosted by Discovery, Inc., the parent company of the Discovery Channel, that just recently established operational headquarters in Knoxville.

Discovery, Inc. recently purchased Scripps Networks. The media company also owns several other television brands including TLC, HGTV, Animal Planet, Food Network, and many others according to the corporation website.

“Global headquarters is in New York, and operational headquarters is here in Knoxville,” Maria Down, the festival’s organizer, said. “We are just really wanting to show Knoxville that we’re still here, and Discovery is not going anywhere.”

Down also said that Discovery, Inc. will continue other community outreach programs cultivated by Scripps Networks such as Impact Day, where over 700 Discovery employees volunteer in and around Knoxville at places like Zoo Knoxville and Helen Ross McNabb Center.

In an effort to show the city and its residents the company’s dedication, Discovery, Inc. capitalized on the 30th anniversary of Shark Week.

“What better way to do so than with sharks!” Down said.

The Shark Week Family Fun Fest was not the only shark themed experience in town. Several downtown businesses including Nothing Too Fancy T-shirt boutique, Maple Hall Bowling Lanes, and Union Ave Books are hosting specials in honor of Shark Week, some lasting all week.